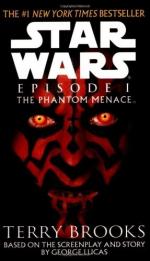 At midday, the gleaming Trade Federation forces and the Gungan army, having emerged from the swamp, are deployed opposite each other.

At the same time, in the city of Theed, the decoy Queen and the Queen's handmaidens, dressed in battle gear, accompanied by Padmy, Anakin, Qui-Gon, Obi-Wan, and a complement of about twenty armed officers, guards, and pilots, plus R2-D2, hunker down in the shadow of a building opposite the main hangar of the Naboo starfleet. Padmy talks briefly to Anakin, telling him that she's sorry about having to hide the truth about her identity from him, but that she feels the same about him now as she did before. Anakin is relieved and says that he guesses his feelings for her shouldn't be any different either.

As they ready to invade the hangar, Qui-Gon tells Anakin to find a place to...