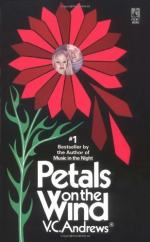 Virginia C. Andrews
This Study Guide consists of approximately 41 pages of chapter summaries, quotes, character analysis, themes, and more - everything you need to sharpen your knowledge of Petals on the Wind.

Petals on the Wind Summary & Study Guide includes comprehensive information and analysis to help you understand the book. This study guide contains the following sections:

This detailed literature summary also contains Topics for Discussion and a Free Quiz on Petals on the Wind by Virginia C. Andrews.

Petals on the Wind by V.C. Andrews is the second in the Dollanganger series. This novel picks up where the first, Flowers in the Attic, leaves off. The surviving Dollanganger children are on a bus bound for Florida, where they hope to become acrobats in the circus. However, Carrie becomes very ill on the bus and they are forced to get off the bus. A fellow passenger on the bus decides to take them to the home of her employer, Dr. Paul Sheffield, a small town country doctor. The children find warmth and acceptance in the home of Dr. Paul. However, Christopher cannot let go of his undying affection for Catherine, Carrie still does not grow as she should, and Catherine cannot let go of a need for revenge against the woman responsible for all their pain. Petals on the Wind is a novel of growing up in an all too real world and of the revenge that can only poison what is good and precious.

Christopher warns his sisters not to tell the widowed doctor the truth about their past, but Catherine sees no other way to get Carrie the help she needs. Despite Christopher's fears, Dr. Paul accepts their story and does all he can to remove the arsenic from Carrie's system, the source of her current illness. When Christopher decides it is time to move on, Dr. Paul insists on keeping them with him, telling them he wants to make them his legal wards through the courts. This will mean notifying their mother of his intentions, giving the children some hope that their mother might come and acknowledge them. However, Corrine Foxworth Winslow does not appear in court, ignoring the summons completely.

Dr. Paul has the children tested and placed in appropriate schools, doing all he can to help them move into a more normal life. Christopher begins an advanced program that will help him excel in college and medical school. Carrie goes to a boarding school. Catherine begins attending high school and a ballet school in the evenings and on weekends. All seems well for the Dollanganger children, but darkness lurks just around the corner. Carrie is tortured at school, left blindfolded on the roof of the building because one of the students thinks she looks funny with her big head and underdeveloped body. Dr. Paul comes to Carrie's rescue and removes her from that school, but the damage has already been done.

As Catherine studies ballet and looks to a bright future, she cannot stop looking back on the past. Catherine blames her mother for everything, including Carrie's health problems and Christopher's refusal to stop showing her inappropriate affections. Catherine knows only two things are important to her mother: her money and her young husband. Catherine knows she must become famous and rich herself in order to be in a position to hurt her mother, so she focuses all the more on her ballet career. This does not stop her, however, from keeping tabs on her mother's movements and sending her letters to let her know that her atrocities are not forgotten.

Through the ballet school, Catherine meets Julian Marquet, the son of her instructors. Julian is in love with Catherine and repeatedly attempts to talk her into moving to New York in order to dance with his dance group. Catherine puts him off, unsure she is ready to leave the safety of Dr. Paul's house. In fact, Catherine has begun a sexual affair with Dr. Paul and hopes to one day become his wife, despite Christopher's concerns. Eventually, Catherine does agree to go to New York in order to improve her chances of becoming a prima ballerina, but she remains true to Dr. Paul, continuing to resist Julian's advances. However, this changes when Catherine learns that Dr. Paul has lied to her about the survival of his first wife.

Catherine marries Julian in a fit of outrage and hurt, but quickly learns her impetuous actions were made based on a half truth. Dr. Paul is devastated by Catherine's choice, but promises to remain her devoted friend. Catherine attempts to make her marriage work, but Julian's controlling behavior keeps her from the siblings she loves and prevents her from becoming the prima ballerina her talent demands. Catherine finally has enough and drugs Julian in order to escape his company and go to Christopher's graduation from medical school. During this break from her marriage, Catherine realizes she is in love with Julian and that she is pregnant with her child. Determined to fix what has broken in the marriage, Catherine goes back to New York. However, in a fit of anger, Julian stomps on her feet and breaks four of her toes, putting her career in jeopardy.

The same night Julian has a car accident that has the potential of leaving him paralyzed. Catherine tells him of the baby and tries to give him a reason to look forward to the future, but all Julian has ever known is ballet. Julian kills himself. Catherine returns to Dr. Paul to have her baby and plan her future. Catherine cannot imagine dancing again without Julian, so she focuses on the revenge she has plotted for so long. Catherine is not rich or famous, so instead she focuses on her mother's husband. Catherine goes to Bart Winslow to help her recover Julian's insurance money. This begins a relationship that will take Catherine to Virginia, through an intense affair with her mother's husband, and a pregnancy that has the power to destroy her mother's marriage.

In Virginia, Catherine buys a dance studio where she teaches young children. At home, Carrie has come with Catherine in order to care for her son, Jory. However, Carrie is emotionally weak and a chance encounter with their mother leaves her devastated. Carrie commits suicide using the same method that killed her twin, Cory. Further pushed beyond the edge, Catherine completes her plans of revenge by arriving at her mother's Christmas party dressed exactly how her mother dressed more than eighteen years ago the first Christmas Catherine and her siblings were locked in the attic. Catherine tells everyone at the party she is Corrine Foxworth Winslow's daughter, effectively breaking the stipulations outlined in the will and taking away her fortune. In her devastation, Corrine starts a fire in the attic, destroying Foxworth Hall and killing her own husband.

Catherine goes back to North Carolina and marries Dr. Paul, living happily as his wife for five years. When Dr. Paul dies of heart disease, Catherine turns to her brother, Christopher. They marry and move to California, where they raise Catherine's two sons, Jory and Bart, together.

More summaries and resources for teaching or studying Petals on the Wind.

Petals on the Wind from BookRags. (c)2022 BookRags, Inc. All rights reserved.