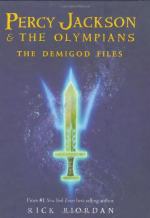 Rick Riordan
This Study Guide consists of approximately 28 pages of chapter summaries, quotes, character analysis, themes, and more - everything you need to sharpen your knowledge of Percy Jackson and the Olympians: The Demigod Files.

Percy Jackson and the Olympians: The Demigod Files Summary & Study Guide includes comprehensive information and analysis to help you understand the book. This study guide contains the following sections:

This detailed literature summary also contains Quotes and a Free Quiz on Percy Jackson and the Olympians: The Demigod Files by Rick Riordan.

Percy Jackson & the Olympians – The Demigod Files by Rick Riordan is one in a series of books from the Demigod Files. There are several adventure stories in this book as well as an activities section for young readers.

The book begins with the adventure of “Percy Jackson and the Stolen Chariot.” Percy is in his high school science class when he hears a commotion outside. He looks out the window and sees that a fellow demigod named Clarisse is in trouble. She is fighting off an attack from a vicious flock of huge ravens. He knows that it’s more than it appears. Percy makes an excuse to his teacher and soon comes to the aid of Clarisse. Although reluctant at first to let Percy help her – her father is Ares and his father is Poseidon, two bitter enemies – Clarisse really needs help to fight off the onslaught and allows Percy to join her battle.

Just as Percy suspected, she had more problems than a flock of birds. She had taken her father’s car for a joy ride and her half-brothers had taken it from her. Actually the vehicle looked like a car to humans but it was really Ares’ war chariot equipped with two huge flame-breathing horses. She had to get the chariot back before Ares discovered it was gone. Her brothers, Phobos, the god of fear, and Deimos, the god of terror, were up to no good. They were determined to keep the chariot from her so that she would face the wrath of Ares. The battle between the demigods and the gods is a brutal one. Eventually, Percy and Clarisse are able to outfight and outsmart Phobos and Deimos and return the chariot to Ares before he knows that it is missing.

In another adventure, the demigods are having fun and playing games at Camp Half-Blood until Percy and his friend Beckendorf encounter a huge ant hill that is inhabited by giant ants the size of German shepherds. They are joined by the demigods Annabeth and Silena. Together, they resurrect a huge bronze dragon automaton to fight off the vicious ants that capture and nearly kill Beckendorf.

In his final big adventure, Percy and demigods Thalia and Nico are summoned to Hades by the goddess Persephone to retrieve a stolen sword that gives its owner the ability to summon the dead. Percy and his demigod friends set off on a mission in the Underworld to find the sword. They face many perils and dangers in their trek. They deal with a troll and the goddess of ghosts as well as a raging giant Titan. But, in the end, they find the sword and return it to Hades with the caveat that he not raise it against the gods of the upper world.

The book ends when Percy is summoned for another mission. His human girl tells him to save the world for her. To Percy, that was not at all a light remark.

More summaries and resources for teaching or studying Percy Jackson and the Olympians: The Demigod Files.

Percy Jackson and the Olympians: The Demigod Files from BookRags. (c)2022 BookRags, Inc. All rights reserved.