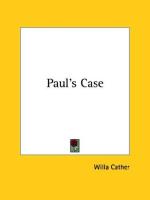 Willa Cather
This Study Guide consists of approximately 44 pages of chapter summaries, quotes, character analysis, themes, and more - everything you need to sharpen your knowledge of Paul's Case.

My Antonia, WillaCather's 1918 novel about the lives of immigrants in the Midwest, is one of her finest and best-known novels.

F. Scott Fitzgerald's novel The Great Gatsby, published in 1925, focuses on Jay Gatsby, a man who lives through romantic dreams. Gatsby defines the American character torn between idealism and materialism.

The Andrew Carnegie Reader, published in 1992 by the University of Pittsburgh Press, contains a selection of Carnegie's writings on business and philanthropy, including "The Age of Steel" and "The Gospel of Wealth According to St. Andrew."

Oscar Wilde's novel The Picture of Dorian Gray, published in 1891, is a key work of the Aestheticist movement. Dorian, vain and rakish, wishes to remain eternally young and handsome. Dorian's portrait ages instead of Dorian, and is kept hidden until the novel's end.

More summaries and resources for teaching or studying Paul's Case.

Paul's Case from Gale. ©2005-2006 Thomson Gale, a part of the Thomson Corporation. All rights reserved.