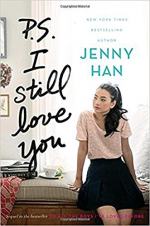 Related Topics
It's Not Summer Without You
To All the Boys I've Loved Before
Always and Forever, Lara Jean
The Summer I Turned Pretty
We'll Always Have Summer

P.S. I Still Love You Summary & Study Guide includes comprehensive information and analysis to help you understand the book. This study guide contains the following sections:

This detailed literature summary also contains Quotes and a Free Quiz on P.S. I Still Love You by Jenny Han.

The following version of the novel was used to create this study guide: Han, Jenny. P.S. I Still Love You. Simon and Schuster, May 26, 2015. Kindle.

In the novel, P.S. I Still Love You by Jenny Han, Lara Jean Song Covey finds herself being pursued by two boys between whom she must choose. Peter Kavinsky was her boyfriend until she broke up with him because he lied to her. John Ambrose McClaren is a grade school friend with whom Lara Jean has recently reconnected. Even though John is the sort of boy she always dreamed of, Peter is the boy she loves despite his flaws.

Lara Jean asks her father to drop her off at Peter’s house after they leave their family’s New Year’s Day party. She has written a letter of apology to Peter but has decided to talk to him face to face. As she tries to talk to Peter, she senses he is not interested in her apology. He sees the letter she wrote to him in her pocket and takes it away from her. After he has read that heartfelt apology, he tells her that he had just been playing hard to get. They renew their relationship and even agree on a contract that they believe will keep them from breaking each other’s heart.

Things are immediately difficult for Lara Jean and Peter when a video of them in a hot tub appears on the Instagram site Anonybitch. It appears they are having sex. In reality, they are only kissing. The next day that video is gone. Peter says that he sent a complaint to the site threatening a lawsuit to make them take it down.

Meanwhile, things are changing in Lara Jean’s neighborhood. An older couple has bought the Pearces’ house and is planning to tear down the tree house where all the neighborhood kids once played. Lara Jean remembers how the old gang had buried a time capsule near the tree house and decides to have a time capsule party to say farewell to the treehouse. John is one of the friends who is invited to the party even though he no longer lives in the neighborhood.

The party is emotional for Lara Jean not only because she realizes she is attracted to John but also because Peter brings Genevieve with him even though Lara Jean did not invite her. The group decides to play a game of Assassins, a game they played in grade school, for old times sakes. Lara Jean decides she wants to win the game simply to prove that she is stronger than Genevieve believes.

When Peter unintentionally tells Lara Jean that he knew that it was Genevieve who submitted the hot tub video but did not tell Lara Jean the truth, Lara Jean breaks up with him. Peter is angered when he sees John and Lara Jean together at a USO themed party that Lara Jean organized for the retirement home where she volunteers. He demands to know if Lara Jean is dating John. He claims he has been friendly to Genevieve only because she was going through a stressful thing with her family. When Lara Jean asks, however, he will not tell her what is happening with Genevieve.

In the game of Assassins, Lara Jean and Genevieve are the only two players left alive. Following Genevieve to tag her out, Lara Jean discovers that Genevieve has been upset because her father is cheating on her mother with a girl who is just a couple years older than Genevieve. With this new information, Lara Jean hurts for her old friend and understands why Genevieve would have called on Peter to comfort her. Even though Lara Jean believes she could love John, she still loves Peter. When Peter asks if they can mend their relationship she agrees.

P.S. I Still Love You from BookRags. (c)2022 BookRags, Inc. All rights reserved.