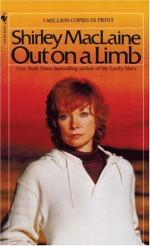 Out on a Limb Summary & Study Guide

Shirley MacLaine
This Study Guide consists of approximately 30 pages of chapter summaries, quotes, character analysis, themes, and more - everything you need to sharpen your knowledge of Out on a Limb.

Out on a Limb Summary & Study Guide Description

Out on a Limb Summary & Study Guide includes comprehensive information and analysis to help you understand the book. This study guide contains the following sections:

This detailed literature summary also contains Topics for Discussion and a Free Quiz on Out on a Limb by Shirley MacLaine.

Out on a Limb by Shirley MacLaine is the third memoir published by the famous dancer and actress. In this memoir, Shirley MacLaine shares with her readers her experiences in self-discovery as she made an attempt to find a deeper meaning in her life during a time of stress and uncertainty. Shirley is having an affair with an English politician, an affair that leaves her confused, lonely, and wondering what it is about her personality that pushes the men in her life away. While struggling with this relationship and the questions it creates, Shirley goes to Peru with her good friend David and learns some of David's convictions about spirituality. These convictions lead Shirley to the realization that it is her purpose in life to write this memoir in order to share this view of spirituality with the world. This memoir is a revealing portrait of a woman in crisis who finds a path to self awareness and peace, a memoir that will offend some and enlighten others.

Shirley MacLaine is a dancer and actress who makes dozens of films in her long career. This memoir is about a period of time in the mid to late seventies when Shirley is in her forties, a divorced woman having an affair with an English politician named Gerry. Shirley is deeply in love with Gerry, but fears that his guilt and his devotion to his wife and children will always leave Shirley alone. Not only this, but conversations with Gerry cause Shirley to wonder what it is about her personality that pushes men away. Gerry tells Shirley that he feels he can never live up to her expectations even as she believes she has no expectations of him. Shirley wishes she could talk to her good friend David about Gerry, but Gerry's position in the English Parliament leaves Shirley unable to discuss her relationship with anyone.

While struggling with her feelings for Gerry, Shirley is happy when David comes to town. The two meet for a yoga class. Afterward, David takes Shirley to a bookstore that specializes in New Age spirituality books. Shirley is mildly surprised by David's interest in the subject and even more surprised when he asks her to have an open mind and reads some of the books about reincarnation. As Shirley reads the books, she finds she is curious to read more and to have a few questions answered. Shirley returns to the bookstore and talks with the owner about his beliefs on reincarnation. The store owner gives Shirley yet more books to study, this time about mediums who help people understand their past lives.

Shirley reads about Edgar Cayce. Cayce channels a man who knows a great deal about medicine. This man is able to listen to people's health concerns and give them ways in which to heal their ailments. About this same time, Shirley runs into a friend from a nearby spa while taking a walk. This friend tells Shirley about a medium similar to Cayce who is currently active in Stockholm. Shortly after learning this, Shirley finds out that Gerry will be in Stockholm the following week. Shirley decides to go to Stockholm to be with Gerry and to visit the medium.

Once Shirley arrives in Stockholm, she finds herself impatiently waiting for Gerry. Soon after his arrival, Gerry tells her that his wife has flown to Stockholm to be with him, so his time with Shirley will be limited. Shirley begins spending time with a friend who lives in Stockholm. This friend suggests Shirley accompany him and his wife to visit a local medium, Sture Johanssen, who channels an ancient man named Ambres, unaware that Shirley has already known about Johanssen and his abilities.

At Johanssen's, Shirley watches as Sture Johanssen goes into a trance and discusses spirituality with his many guests. Shirley is overwhelmed by the experience, still unsure what to believe. Back at her hotel, Shirley begins writing obsessively about everything that has been going on her life, remaining in Stockhom much longer than she originally plans. When Shirley finally returns to Los Angeles, she once again runs into her friend from the spa. This friend tells Shirley that they brought in a medium to the spa to talk with guests and that they could set up an appointment with Shirley.

The medium, Kevin, comes to Shirley's home one evening and has a pleasant conversation with her before channeling his spirit companions. These companions, John and Tom McPherson, tell Shirley that two people who are currently in her life are spirit companions who have also been a part of her past lives. In fact, one of the spirits is Gerry and he is a spirit Shirley has been married to in a past life. The other, David, is a spirit who is like Shirley's soul mate, the one spirit who will always be in her life no matter the circumstances.

Overwhelmed by her meeting with Kevin, Shirley throws herself into learning more about reincarnation. For many months Shirley studies these books while traveling with her stage show. When Shirely finally arrives back home, David comes to see her. David convinces Shirley to travel with him to Peru. Shirley agrees, though she is shocked to find they will be staying in a tiny mountain village in a hotel that is little more than two barren rooms. However, there are sulfur springs there that help Shirley find a level of relaxation she has never known before. In fact, these springs enable Shirley to have an out of body experience that helps her to become more receptive to some of the spiritual concepts David wishes to share with her.

David tells Shirley about meeting a woman, Mayan, there in the mountains while hiking with friends. This woman appears to know a great deal about David without his sharing the information with her. This woman also tells David that she is from outer space, even showed him the exact area in the sky where she has come from. Mayan tells David that the soul is a real thing, that it exists in the space between molecules that causes atoms to remain intact, a form of energy scientists do not understand. Mayan also explains that souls are immortal and they are returned to physical form in order for the soul to work out some kind of Karmic justice. Finally, Mayan tells David he will one day meet Shirley and that he should tell her these things so that she can tell the world through her celebrity.

At first Shirley refuses to believe David's story, finding the idea of aliens illogical. However, as she continues to spend time in Peru with David, she finds herself more open to his ideas. Shirley eventually returns to Los Angeles where she will form some conclusions of her own and write this memoir, just as Mayan says is her destiny.

More summaries and resources for teaching or studying Out on a Limb.

Out on a Limb from BookRags. (c)2022 BookRags, Inc. All rights reserved.