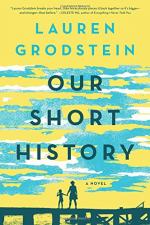 Lauren Grodstein
This Study Guide consists of approximately 79 pages of chapter summaries, quotes, character analysis, themes, and more - everything you need to sharpen your knowledge of Our Short History.

This detailed literature summary also contains Quotes and a Free Quiz on Our Short History by Lauren Grodstein.

The following version of this book was used to create the guide: Grodstein, Lauren, Our Short History, Algonquin Books of Chapel Hill, 2017

Karen Neulander is a political consultant who has been diagnosed with stage IV ovarian cancer. She has a now six-year-old son called Jacob, and she is writing a book of memories, stories, and advice for him to have when he turns eighteen since she has only got a couple more years to live. Karen is currently working as a campaign manager for a Congressman called Ace Reynolds. Their opponent is Beverly Hernandez, a Dominican woman who incidentally, is a cancer survivor. Bev becomes a great source of inspiration and encouragement to Karen, and Karen respects her even though they hold some opposing political views.

Jacob knows that his mother is not going to be around for long and one day asks her if she can find his father. Karen and Jacob’s father, Dave used to be in a relationship but when Dave found out she was pregnant, he told her that children were not in his plan and Karen left, not hearing from him or contacting him again. She was heartbroken by the way things ended and her own father was a massive support to her during her pregnancy. Because she knows it is the right thing to do, Karen reaches out to Dave on Facebook and tells him she has something important to discuss with him. When Dave finds out he has a son, he is overwhelmed and wants to meet Jacob.

Dave and Jacob get on very well and form an instant connection. Karen worries that Dave will try and take Jacob away from her, or away from her family after she dies. They have several meetings, and Dave looks after Jacob when Karen’s condition deteriorates, and she is in hospital. Karen makes her sister, Allison promise that she will not let Dave steal Jacob away after her death. The plan is for Jacob to go and live with Allison and her family on Mercer Island in Seattle.

Karen is able to work during periods of relatively good health, and goes to visit her business partner, Chuck at their offices. Chuck tells her that he wants to hire reinforcements because she cannot handle the high-energy work the way she used to. She is furious and they have an argument, but she stays on to work anyway. Bev dies of a stroke and Karen and Ace attend the memorial service where Bev’s daughter, Rosanna eulogizes her mother and says she is angry at her for dying without saying goodbye. Karen is distraught at Bev’s death, and terrified that Jacob will hate her after she dies too. When it comes out that Ace is having an affair with a college-aged staff member, he decides to drop out of the race so as to preserve his marriage and family life. Karen is left unemployed and with more time to spend with Jacob.

Jacob makes it very clear that he wants to see more of Dave, so Karen decides to put the past behind her and let Dave be a bigger part of Jacob’s life. She tells him that he needs to learn what it means to look after a young child, and that he cannot just be the Father Christmas figure in Jacob’s life. Karen tells him that the reason she is allowing Dave to be a parent to Jacob is because Jacob loves him and needs more people in his life after she is gone. Dave is moved and promises to do right by Karen and Jacob. Karen gives Dave a box of things to give to Jacob when he is older, including her manuscript. Karen ends her book by telling Jacob how much she loves him, and thanking him for being the best thing in her life. She feels at peace.

More summaries and resources for teaching or studying Our Short History.