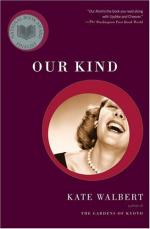 Plot Summary
+Chapters Summary and Analysis
The Intervention
Esther's Walter
Bambi Breaks for Freedom
Screw Martha
Come as You Were
Sick Chicks
Warriors
Back When They Were Children
The Hounds, Again
The Beginning of the End
Free Quiz
Characters
Objects/Places
Themes
Style
Quotes
Topics for Discussion
Order our Our Kind: A Novel in Stories Study Guide

Our Kind: A Novel in Stories - The Beginning of the End Summary & Analysis

Kate Walbert
This Study Guide consists of approximately 37 pages of chapter summaries, quotes, character analysis, themes, and more - everything you need to sharpen your knowledge of Our Kind.

The Beginning of the End Summary

Viv reflects on how she might describe how she and Don experience the beginning of the end as the others have when her turn comes. That reflection leads her to remember experiences she had when meeting with Professor Dipple and Cilla Whitney the fateful day that she told them she was going to marry Don rather than continue her schooling and scholarship.

Professor Rebecca Westerlake hangs behind the Professor and Cilla as Viv meets with them. Though they plan to take a walk, the rain discourages that which was all right with Viv. She found herself, while walking idly, chatting and carrying on about nothing in particular and avoiding discussion of the issue at hand.

The Professor and Cilla waned to discuss with Viv her career at Smith. Professor Dipple stated she became aware Viv...

(read more from the The Beginning of the End Summary)

More summaries and resources for teaching or studying Our Kind: A Novel in Stories.

Our Kind: A Novel in Stories from BookRags. (c)2023 BookRags, Inc. All rights reserved.