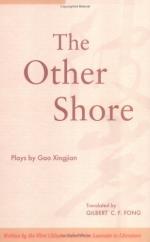 The Other Shore Characters

Gao Xingjian
This Study Guide consists of approximately 35 pages of chapter summaries, quotes, character analysis, themes, and more - everything you need to sharpen your knowledge of The Other Shore.

Actors playing themselves open and close the play, helping to give the drama its circular movement: the play ends as it begins. When the play opens, a single actor leads the troupe in an exercise with ropes and, as the play ends, the actors reflect upon the play they have just acted in as they leave for their non-theatrical lives. Xingjian originally conceived of The Other Shore as a training piece for actors.

The Card Player offers the Crowd and Man a chance to win a drink of wine with a deceptively simple card game, but Man discovers that the game is rigged, and it is impossible for him or the Crowd to win. When Man tries to point this out to the Crowd, the Crowd doesn't believe him and jeers Man. The Card Player manipulates the Crowd and convinces its members and Man that Man...

More summaries and resources for teaching or studying The Other Shore.

The Other Shore from Gale. ©2005-2006 Thomson Gale, a part of the Thomson Corporation. All rights reserved.