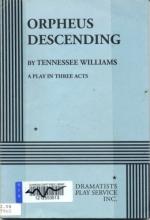 Tennessee Williams
This Study Guide consists of approximately 68 pages of chapter summaries, quotes, character analysis, themes, and more - everything you need to sharpen your knowledge of Orpheus Descending.

1950s: The American South is largely segregated, with many public facilities designated for "whites only." During the 1950s, the modern civil rights movement begins.

Today: Overt racial discrimination has largely ended and laws are in place to ensure that it does not recur. However, race relations remain problematic in many ways. Minorities complain of the practice of "racial profiling," in which African Americans or Hispanics are sometimes targeted by police just because of their race, not because there is any evidence linking them personally to a crime.

1950s: Sexual attitudes throughout American society are conservative, especially in the so-called Bible Belt in the South. Pre-marital sex is frowned upon.

Today: After the freedom of the 1960s and 1970s, sexual mores once more tilt to the conservative, largely because of the risk of contracting the deadly disease AIDS. However, American society has not returned to...

More summaries and resources for teaching or studying Orpheus Descending.

Orpheus Descending from Gale. ©2005-2006 Thomson Gale, a part of the Thomson Corporation. All rights reserved.