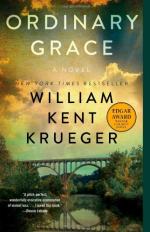 “Ordinary Grace” by William Kent Krueger is the story of the Drum family’s summer in 1961. The story is told thirty years later by Frank Drum who was 13-years old at the time. The Drum family consisted of Nathan and Ruth and their three children, Ariel, Frank and Jake. Nathan was the minister at the Third Avenue Methodist Church in what was known as the Flats in New Bremen, Minnesota. Nathan was a bright and devout man who also led the worship at two other churches in the region, Cadbury Methodist and Fosburg Methodist. Ruth, a lover of music, led the choir at all three churches. Ariel was a brilliant musician and budding composer who played the organ at the churches. Thirteen-year-old Frank and his younger brother by two years, Jake, handed out flyers. All five members of the family were required to attend all three services.

Ruth liked the music but never planned to be a minister’s wife. When she married Nathan he had just earned his law degree and was heading for a long and lucrative career as an attorney. He enlisted in the Army and served in Europe during World War II. Killing the enemy changed his career plans and the life that Ruth thought she would have. Nathan struggled the rest of his life for what he was forced to do during the war. He became a dedicated Methodist minister in atonement for his sins. Ruth wasn’t the typical minister’s wife by any stretch. She publicly smoked and drank, skipped meetings of the women’s auxiliary and had a lot of questions about God and his very existence.

It was hot and muggy in the summer of 1961. There was a disturbing undercurrent in the small town community. A young boy, Bobby Cole, who was a contemporary of Frank’s was found dead on the train tracks just beyond the Flats. It was a stunning occurrence in the small town where nothing out of the ordinary ever happened. Nathan and Ruth forbade the boys to play on the tracks or go near the trestle. Officer Doyle, one of the local cops, warned them that there were bad men who hung out around the trestle. Doyle’s comment made Frank think more than ever that Bobby’s death was not an accident. It was Frank’s nature to allow his natural curiosity and determination to learn the truth that easily trumped his parents’ orders not to hang out on the trestle.

Frank convinced the more reticent Jake to come with him to the trestle. He wanted to look around to see if he could find anything that could hint at the possibility that Bobby’s passing wasn’t an accident. Frank and Jake were sitting on the trestle when they observed an unknown man emerge from the bushes below and sit next to a man on the river bank who appeared to be sleeping. The man took a swig of liquor and noticed the two boys. He told them to join him and that his companion was dead – he was talking up a storm and suddenly just keeled over dead as a doornail. It was the second death that summer and Frank now had more questions than answers.

There would be more dead bodies showing up in small town New Bremen and Frank and Jake seemed to always be right in the middle of things. One of the murders nearly destroys the Drum family and drives a wedge between Nathan and Ruth that at times seemed irrevocable. Frank’s quick mind and Jake’s quiet wisdom solve the most devastating and dramatic death that occurred that summer. Frank had been determined to uncover all the lingering questions that loomed over the town. He knew it meant the very survival of his family.