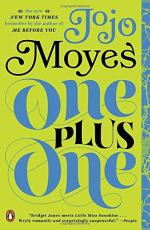 One Plus One (Novel) Summary & Study Guide

Jojo Moyes
This Study Guide consists of approximately 42 pages of chapter summaries, quotes, character analysis, themes, and more - everything you need to sharpen your knowledge of One Plus One.

One Plus One (Novel) Summary & Study Guide Description

One Plus One (Novel) Summary & Study Guide includes comprehensive information and analysis to help you understand the book. This study guide contains the following sections:

This detailed literature summary also contains Quotes and a Free Quiz on One Plus One (Novel) by Jojo Moyes.

“One Plus One” is a contemporary novel of romance and family by JoJo Moyes, in which potential criminal millionaire Ed Nicholls agrees to drive the kind and financially-strapped Jess Thomas and her children to a math competition in Scotland. Reeling from a bad marriage, and wanting to get out of a relationship with Deanna Lewis whom Ed knows is only with him for the money, Ed suggests Deanna purchase stock in SFAX, the newest financial software that will soon be launched by his company, Mayfly. Ed even gives Deanna a loan in the form of the check to make the purchase. Deanna passes along the information to her brother, who in turn makes millions on the launch – after which time Ed is put under investigation for insider trading.

Meanwhile, 27-year-old Jess Thomas does her best to keep afloat financially. Jess works in house cleaning, including the vacation house of Ed Nicholls, and works at a local pub during the evenings. One night, Jess brings home a drunken Ed, only to find that he has left a massive wad of money and a work ID behind. Jess has two children – the Gothic-dressing 16-year-old Nick (known as Nicky) from one of her ex-husband’s former relationships, and her own daughter by her ex-husband, 10-year-old math prodigy Tanzie. Nick is a constant victim of bullying, while Tanzie doesn’t fit in due to her extraordinary intelligence. Jess receives word from St. Anne’s, an elite private school, that they are interested in having Tanzie attend, and are willing to provide a scholarship to cover 90% of tuition and costs. Jess must come up with 2,000 pounds to register Tanzie by the end of June for the following year. Jess, ever the optimist, begins to figure out how to scrape together the money. When she learns that there will be a competition in math – the Math Olympiad – in Aberdeen, Scotland, Jess decides to enter Tanzie, for the first-place prize is 5,000 pounds. She uses Ed’s cash as a downpayment on registration, knowing she will pay him back with the prize money.

Borrowing her ex-husband’s car, Jess runs over a curb outside of town and is unable to complete the journey. With even more bills now, Jess does her best to remain positive and to figure out the next step. While driving around feeling distraught, Ed comes across Jess, her children, and their dog at the scene of the accident. Looking to get away and without really thinking, Ed volunteers to take Jess and her family to Scotland. Jess reluctantly accepts. As the journey unfolds over the next few days, Ed and Jess slowly learn about one another. Ed finds much to like in Jess’s commitment to her children, and her eternal optimism, while Jess admires Ed for his kindness and commitment to responsibilities. Jess and Ed come to learn about one another’s lives, and Ed even comes to encourage Nicky in finding himself through writing blogs while supporting Tanzie’s love of math. Jess quickly falls in love with Ed, and supports him as he admits the truth about his investigation to his parents and sister. As the trip comes to an end, Ed and Jess realize how much they will miss each other, and how much like a family they have been.

Back home, Ed discovers his ID card at Jess’s house, and Jess admits to using his money for a downpayment on tuition. Ed is horrified, thinking Jess only wants him for his money. In court, Ed is found guilty of insider trading, but does not go to jail, though he is fined 750,000 pounds. After a discussion with his sister, who points out that she believes Ed can trust Jess, Ed reconnects with Jess. The two begin a real relationship while Ed decides to build a new company. Jess begins her own handyperson business, and Nicky’s confidence is boosted by blogging and he begins seeing a girl. Tanzie attends St. Anne’s and makes a best friend.

More summaries and resources for teaching or studying One Plus One (Novel).

One Plus One (Novel) from BookRags. (c)2022 BookRags, Inc. All rights reserved.