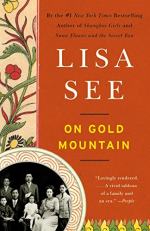 Related Topics
Dragon Bones: A Novel
Dreams of Joy: A Novel
Snow Flower and the Secret Fan
The Tea Girl of Hummingbird Lane
The Island of Sea Women

Lisa See
This Study Guide consists of approximately 45 pages of chapter summaries, quotes, character analysis, themes, and more - everything you need to sharpen your knowledge of On Gold Mountain.

Dragon’s Den continues to do well. Sissee, unmarried but dating Gilbert Leong, spends most of her time with Ticie, who, even after all these years, still loves Fong See. Ticie becomes an alcoholic and neglects her responsibilities. Ted, Stella’s ten-year-old brother, comes to live with Eddy and Stella when Stella’s mother is institutionalized. Stella misdirects her internal anger over Eddy’s affair on Ted and her son Richard. Eddy ends the affair.

More summaries and resources for teaching or studying On Gold Mountain.