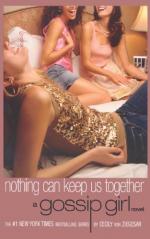 Plot Summary
+Chapters Summary and Analysis
Hey People! to D Is Mr. Popularity
S Has Rendered Party School Totally Useless to S Demonstrates How to Be Naughty and Nice
N's New Drug of Choice to V Experiments With Double Happiness
D Chooses Real Sex Over Sex Poems to See B Die and Go to Heaven
Objects Reflected in Mirror. . . to S Gets to Say Her Lines Twice
Boys Will Be Boys . . . to Cheating for Old Times' Sake
Too Many Boys. . . to D Could Use a Little More Love
A Reads V Like a Book to Her Heart Is On Some Other Boy's Sleeve
Will J Resort to Homeschooling? to Remind Me How Much I Love You
N's Trail of Tears to D Rethinks His Summer Plans
Sex, Drugs, and Rock 'n Roll to You Know You Love Me
Characters
Objects/Places
Themes
Style
Quotes
Topics for Discussion
Order our Nothing Can Keep Us Together: A Gossip Girl Novel Study Guide

Nothing Can Keep Us Together: A Gossip Girl Novel Summary & Study Guide

Cecily Von Ziegesar
This Study Guide consists of approximately 18 pages of chapter summaries, quotes, character analysis, themes, and more - everything you need to sharpen your knowledge of Nothing Can Keep Us Together.

Nothing Can Keep Us Together: A Gossip Girl Novel Summary & Study Guide Description

Nothing Can Keep Us Together: A Gossip Girl Novel Summary & Study Guide includes comprehensive information and analysis to help you understand the book. This study guide contains the following sections:

This detailed literature summary also contains Topics for Discussion on Nothing Can Keep Us Together: A Gossip Girl Novel by Cecily Von Ziegesar.

Nothing Can Keep Us Together is a novel in the popular Gossip Girl series, telling the story of the lives of several privileged New Yorkers. In this installment, the main characters, including Serena, Blair, Nate, Chuck, Dan, and Vanessa, are approaching graduation and the end of their time together in New York. At the same time, Dan's sister Jenny must figure out what to do with herself during the next school year, because she can no longer stay at her current school.

The novel begins with the female characters selecting outfits for graduation, which must be white. This chapter also presents the conflict between Serena and Blair: Serena has "stolen" Blair's boyfriend, Nate. Blair, meanwhile, is living in Brooklyn with her friend Vanessa. When Vanessa's sexual escapades on their roof get to be too much for Blair, Blair moves back into Manhattan to stay at the Yale Club, of which her father is a member. There, she meets Lord Marcus, a member of the English aristocracy and a Yale alum, whom she begins to date, taking her mind off of Nate. Nevertheless, she and Serena are still in conflict, going up against each other for a role in a film, which Serena eventually gets. Their rivalry comes to a head at graduation, when they show up wearing the same outfit. All the same, the book concludes on an ambiguous note, in which they are possibly going to partake in a threesome with Nate.

Meanwhile, Jenny visits school after school, some of which she does not want to attend and others of which she is not allowed to attend. Finally, she submits an artistic portfolio to a school called Waverly Prep, where she is accepted. Delighted, she makes out with Nate at the end of year party at the Yale Club. At the same time, her brother Dan is seeing his friend Vanessa again, who is cheating on her current boyfriend, Aaron (Serena's brother), with him. His feelings for Vanessa make him renounce his college education, since he wants to defer for a year; however, his father, Rufus, buys him a car and convinces him to think it over during the summer.

Throughout the narrative, Nate is depressed. He smokes a lot of marijuana, and is upset that he is physically unable to have sex with Serena. Because of this, he steals a bottle of Viagra that he finds in his Lacrosse coach's office. When he is caught, though, he is nearly prevented from graduating, and is only allowed to do so by promising to spend the summer repairing the coach's house in the Hamptons. At the end of the novel, his girl problems are further complicated when Serena, his supposed girlfriend, catches him making out with Jenny; he then appears to initiate a three-way with Serena and Blair.

More summaries and resources for teaching or studying Nothing Can Keep Us Together: A Gossip Girl Novel.

Nothing Can Keep Us Together: A Gossip Girl Novel from BookRags. (c)2022 BookRags, Inc. All rights reserved.