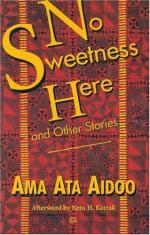 Introduction & Overview of No Sweetness Here

Ama Ata Aidoo
This Study Guide consists of approximately 36 pages of chapter summaries, quotes, character analysis, themes, and more - everything you need to sharpen your knowledge of No Sweetness Here.

The story is narrated by a character known as Chicha, which is the local pronunciation of "teacher." Chicha is a Westernized woman who is the schoolteacher in the small Fanti village of Bamso. As the story opens, she is visiting Maami Ama, whose beautiful ten-year-old son Kwesi is Chicha's favorite pupil. Maami Ama tells Chicha of her seven-year-long marriage to Kodjo Fi; although she is his first wife, her husband has neglected her and shut her away from the rest of his family. The divorce proceedings between Maami Ama and Kodjo Fi take place the following day. As a result, Kwesi is to be taken away from his mother and placed in the custody of his father, who has taken no interest in him up to this point. Shortly after this decision is made, Kwesi is found bitten by a snake, and dies that night. After Kwesi's funeral, Chicha finds Maami Ama alone in her hut, clutching Kwesi's schoolbooks and uniform in agonized mourning.

This story concerns several themes central to Aidoo's works of fiction. It places an educated, Westernized African woman in the context of traditional village life. From this "outsider" perspective, the narrator is able to observe the unfair treatment of women in traditional marriage customs.

More summaries and resources for teaching or studying No Sweetness Here.

No Sweetness Here from Gale. ©2005-2006 Thomson Gale, a part of the Thomson Corporation. All rights reserved.