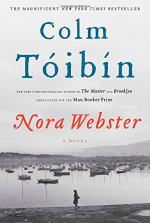 Colm Tóibín
This Study Guide consists of approximately 40 pages of chapter summaries, quotes, character analysis, themes, and more - everything you need to sharpen your knowledge of Nora Webster.

“Nora Webster” is an historical literary novel by Colm Toibin, dealing with the life of Nora Webster through three years after the death of her husband, Maurice. When the novel begins, it is the late 1960s in Wexford, County Wexford, Ireland. Nora is reeling with the recent death of her husband, and is doing all she can to keep on a strong exterior for her children. Her children include Fiona, training to be a teacher, Aine, at university in Bunclody, 13-year-old Donal, who has developed a stutter, and Conor, the youngest.

Money is a major issue for the family right away. Nora begins by selling the family’s vacation cottage, which gives the family some breathing room financially, but makes the all of the children very upset. They love the beach cottage because it holds so many good memories for them. Apart from needing money, Nora cannot bear to face the past in the cottage, which helps steel her determination to sell it, which she does.

Nora takes on work at Gibney’s, a major mill company in the area owned and operated by the Gibney family, with whom Nora has long been friends. The Gibneys are wealthy not only from their business, but from the investments they have made as well. Nora comes to work handling invoices, bonuses, and expenses for the company, and clashes with Miss Kavanagh, the office manager. Years before, Nora and Kavanagh both worked in the company as teens, but never got along. Nora’s primary concern then was to earn money to support her family, for her father had died when she was 14. Marriage to Maurice saved Nora, and gave her freedom.

In the present day, Nora struggles to make enough money to help out her children. Her relatives – her husband’s siblings and her own siblings – also help out her children financially in order to make sure they are able to attend college, and have what they need. This is done out of love for one another, and out of love of family. Especially concerned is Aunt Josie, who worries that Nora is exhausting herself. Josie brings Nora away on vacation in Spain, which Nora enjoys. Nevertheless, she still cannot deal with her husband’s passing.

Fiona graduates from her program and becomes a teacher in Wexford, while Aine goes on to become a politically-minded student activist in Dublin. The anti-British riots in Dublin prove to be a source of worry for Nora and her family, and some of them head to Dublin to make sure Aine is okay. Donal takes a heavy interest in photography, and decides to go to boarding school to help eliminate his stutter. Conor also takes an interest in photography, and worries about everything from finances to how the family car runs.

Despite the family growing closer, and Nora stepping back out into the social scene with her friends and family, Nora still has a difficult time getting over the past. She decides to remodel her house, doing some of the painting herself. She hyperextends muscles, and must go on pain killers which keep her up at night. As a result, she loses much sleep, and passes out at work. She is prescribed sleep medication, and has a vision of Maurice.

Maurice tells her that everyone in the family will be fine except Conor. He will not give any details. He also tells her that she should be worried about the “other one”, by which he means Nora herself, though Nora does not understand this right away. Nora goes to see her Aunt Josie about the vision, but Josie writes it off as exhaustion on Nora’s part. Josie has Nora stay the weekend, tends to her, and takes care of her. She tells Nora that this is what family is for. By the end of the novel, Nora feels renewed, and decides it is finally time to let the past go. She gets rid of Maurice’s old things, and burns old letters from Maurice when they first began dating.

More summaries and resources for teaching or studying Nora Webster.