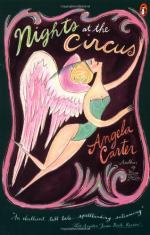 Nights at the Circus Summary & Study Guide includes comprehensive information and analysis to help you understand the book. This study guide contains the following sections:

This detailed literature summary also contains Topics for Discussion on Nights at the Circus by Angela Carter.

Nights at the Circus is divided into three sections. The first section is set in London in 1899, just before the turn of the century. Jack Walser, a young but well-traveled journalist, is interviewing Sophie Fevvers, an aerialiste, originally for the Cirque d’Hiver, but now for Captain Kearney’s Grand Imperial Tour. The performer, who goes only by the name Fevvers, is extraordinary in that she claims to have real wings. She is tall, blonde, curvy, and beautiful: “The Cockney Venus.” Raised in a brothel, Fevvers has working-class beginnings, and she often speaks in an earthy manner, using ribald language. However, she is also an auto-diadact, having seemingly provided herself with a broad education. Her language, therefore, is also quite lofty at times, peppered liberally with sophisticated vocabulary and literary references.

Fevvers’ act consists of “flying” up to the trapeze where she performs a high wire routine. She is over six feet tall, so her performance lacks the speed of other high wire acts; however, crowds gather to witness her hook: a six-foot wingspan. Although she claims to be a physical anomaly, she openly challenges others to decide whether her outlandish claims are true.

Walser, who is skeptical, decides to interview her and discover on his own if she is “fact or fiction.” He plans to publish his findings in a newspaper series entitled “Great Humbugs of the World.” Although he sets out to disprove her claims in his initial interview, he becomes enchanted as she spins her tale.

Fevvers tells Walser she was left on the steps of a brothel in the shells of the egg from which she hatched. At birth, she had little down buds on her shoulders, but, at the age of fourteen, she sprouted wings that continued to develop as she grew. She tells him farfetched tales of her past he is not sure he can believe; however, her presence is intoxicating and he finds himself wanting to believe everything she says. Walser falls in love with Fevvers and follows her as she joins the circus on the “Grand Imperial Tour,” which is travelling to Tokyo via Russia; followed by yet another tour through the United States.

The second section of the story, set in St. Petersburg, finds Walser working as a clown in the circus to be near Fevvers, who has top billing and is the star of the show. The audiences love her and she receives many invitations to dine out with rich men. Prompted by greed, she flirts with them for attention and gifts. However, as she also claims to be a virgin, there is only so far she will take the flirtation.

The circus suffers many setbacks while in St. Petersburg. First, a tiger attacks Walser. Also, an affair within the circus ranks leads to tragedy, and Fevvers takes the woman, Mignon, who has been beaten and thrown out by her husband, under her proverbial wing. Fevvers not only finds Mignon a new place in the circus, but also a new, and unexpected, lover.

Fevvers, realizing that Walser has joined the circus to be near her, slowly realizes she has growing feelings for him; still, she has been raised to distrust love and abhor marriage, and her feelings for money are much stronger. On their last night in St. Petersburg, the circus loses the leader of the clown troupe to insanity. In addition, the tigress attacks Mignon and must be shot, and the ape act deserts the circus for something better. Fevvers is almost lost, for in pursuit of her greed she puts herself in a dangerous situation with a man who finds her wings fascinating and wants to keep her for his collection. She escapes, but her feeling of invulnerability is lost. Her love of money also loses its luster.

In the third section, the troupe is headed across Siberia on its way to Tokyo. The train on which they are traveling derails, killing many of the animals on board and leaving the troupe stranded in the wilderness. It is a cold and desolate landscape. Although Fevvers searches frantically for him, Walser cannot be found. Fevvers and the other circus survivors are soon taken hostage by outlaws, who, due to faulty intelligence, believe Fevvers can help them return to their families by pleading their case to the Queen of England: a relative to the Tsar of Russia. Unfortunately, Fevvers cannot help them and she and the survivors must plot their escape. During this time, Walser is found by escaped prisoners who are picking through the train wreckage. Hit on the head and suffering from amnesia, he wanders off into the woods and is taken in by the shaman of a tribal village.

Fevvers and the other survivors set out to return to the train wreckage, but instead find themselves at a house by a river in the middle of the wilderness. There they find the Maestro. He helps them survive, and Mignon and her lover, in return, help him to rediscover himself and his dreams. During this time, Fevvers is worried about Walser, even though she still writes of her feelings for him as purely physical in nature. She has heard rumors that he is alive and plans to find him. She and Lizzie, her foster mother and constant companion, set out into the wilderness to find Fevvers’ lost love, as she has realized love is more important than money.

The women find Walser in the tribal village where he is slowly regaining his memory. Fevvers’ presence speeds his recovery and the two finally get to be together. The question of whether her story is fact or fiction is left for the reader to decide.

Nights at the Circus from BookRags. (c)2022 BookRags, Inc. All rights reserved.