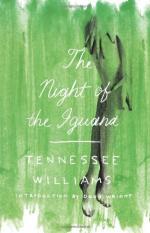 The Night of the Iguana Characters

Jonathon Coffin is the elderly grandfather of Hannah Jelkes. He is nearly 98 years "young" and a minor poet. With his granddaughter, he travels around the world, paying his way by reciting poems to hotel guests. Coffin is somewhat senile, very hard of hearing, and uses a wheelchair and a cane to get around. His dementia increases during the night at the Costa Verde. Coffin manages to finish one last poem before he dies at the end of The Night of the Iguana.

Maxine is the middle-aged padrona of the Costa Verde Hotel. She has recently been widowed; her husband Fred has died. Even before his death, Maxine was sleeping with other men, mostly local boys. Maxine is an old friend of Shannon's. Though he is suffering from mental collapse, she tries to ply him with rum-cocos in an attempt to get him under her control...