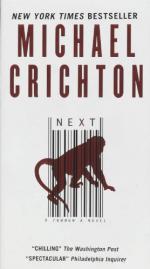 Get Next from Amazon.com
View the Study Pack
View the Lesson Plans
Study Guide
Order our Next Study Guide

Michael Crichton
This Study Guide consists of approximately 50 pages of chapter summaries, quotes, character analysis, themes, and more - everything you need to sharpen your knowledge of Next.

Next Summary & Study Guide includes comprehensive information and analysis to help you understand the book. This study guide contains the following sections:

This detailed literature summary also contains Topics for Discussion and a Free Quiz on Next by Michael Crichton.

Next is a novel by writer Michael Crichton. This novel questions the impact of bio-research on the world's population. Crichton presents several scenarios, including the question of ownership of one man's cells, the use of new therapies in humans without proper animal testing, and the idea of crossing human DNA with that of animals. The characters in the novel struggle with these issues, issues that seem outrageous at first but quickly begin to hit home with the readers. Like many of his other works of fiction, Next leaves Crichton's readers more frightened than they might have been if they had curled up with a good horror novel.

Frank Burnet sues his doctor, UCLA, and BioGen Research for stealing cells from his body and selling them to make cancer fighting drugs. Frank comes off in the press as ungrateful to his doctor for saving his life and unwilling to help in a process that will save millions of lives. The judge appears to agree with this bad press because he rules against Frank, in essence saying that BioGen owns the very cells that still circulate in Frank's body. Frank vows to continue fighting. During a meeting with his lawyers and the lawyers from BioGen, Frank is approached by a man who claims that he can find a way for Frank to profit from the cells that still circulate in his body. All Frank has to do is take a vacation.

Henry Kendall hears on the news that some tourist saw an orangutan in Sumatra that could speak. This causes Henry to remember an experiment he began and failed to complete at the NIH labs four years before. When, a few weeks later, Henry is sent a vial of blood from a friend who works at the NIH, Henry's worst fears are confirmed. The chimpanzee embryo he transferred his own DNA to somehow survived and is now a four-year-old chimpanzee who can speak and reason like a human child. Henry visits the animal only to learn that the lab intends to destroy him. Henry sneaks the animal out of the lab and takes him home where his wife insists they raise him as one of their own.

Josh Winkler works at BioGen where he is running experiments on a maturity gene. Josh is in the middle of administering the gene to his mice when his mother calls and asks him to pick his brother up at the courthouse. Josh's brother, a drug addict, has been arrested again. Josh does as he is asked, taking the canister containing the gene with him so he can complete the administration upon returning. However, when Josh stops for gas, his brother inhales the contents of the canister, thinking it might be something that will make him high. Within days, Josh's brother is off the drugs and holding down a full time job for the first time in several years. However, a side effect of the maturity gene is rapid aging. Josh's brother and another drug addict Josh gave the spray to will be dead in a matter of weeks.

Rick Diel is in the middle of a bitter divorce and struggling to keep BioGen out of the hands of his investor, Jack Walton. When Rick's car is stolen from the BioGen parking lot under the watchful eyes of his head of security, Rick decides to hire a security firm recommended by Jack Walton. Within days, Rick's head of security is arrested for having sex with a minor. Things begin to look up for Rick until his wife disappears, leaving him with their small children, and the Burnet cell line, which is the backbone of his company, is contaminated. Rick goes to his lawyers in order to find a way to rectify at least the ruined cell line. The lawyers tell Rick that because he owns the cell line, he can take it from any source necessary. Since Burnet has disappeared, the lawyers advice Rick to hire a bounty hunter and take the cells by force from Burnet's daughter or grandson.

Alex Burnet rushes to her son's school when the teacher calls telling her that someone has attempted to pick him up. Alex barely escapes a kidnapping attempt when she arrives at the school. Alex takes her son, borrows her assistant's car, and leaves town. Alex arrives at the Kendall home moments ahead of her pursuers. The bounty hunter mistakes Kendall's son for Alex's and steals him off the street, right in front of Dave, the chimpanzee-human hybrid Henry Kendall created. Dave wants to protect his new brother, so he climbs onto the kidnappers' car and attacks the driver, causing an accident. The kidnappers escape and manage to steal the right child moments later.

Alex, Henry, and Dave follow the kidnappers and steal Alex's son back at gunpoint. At the same time, a judge is considering whether or not BioGen has the right to take cells from Alex and her son without their consent. The next day the judge rules that BioGen does not have this right and that they do not have the right to take them from Frank Burnet, either. The judge rules that no one can own another person's cells but that person. This ruling effectively ruins BioGen, who is already struggling under a lawsuit brought by a cousin of Josh Winkler's mother. Josh sent this cousin a canister that was supposed to contain the maturity gene, but actually contained saline. The cousin's family is accusing Josh's canister of causing their mother's Alzheimer's disease.

More summaries and resources for teaching or studying Next.

Next from BookRags. (c)2022 BookRags, Inc. All rights reserved.