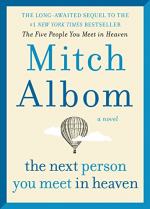 The Next Person You Meet in Heaven Summary & Study Guide

The Next Person You Meet in Heaven Summary & Study Guide Description

The Next Person You Meet in Heaven Summary & Study Guide includes comprehensive information and analysis to help you understand the book. This study guide contains the following sections:

This detailed literature summary also contains Quotes and a Free Quiz on The Next Person You Meet in Heaven by Mitch Albom.

This guide was made with the following version of this book: Albom, Mitch. The Next Person You Meet In Heaven. New York: Harper, 2018.

The story begins with a countdown to Annie's death. A nurse, Annie wed Paulo, a man she had met while in grade school. They married with 14 hours left until the end, and in the intervening time, Annie felt a sense of foreboding when she saw a seemingly familiar old man in her wedding audience. Annie further felt an inexplicable sense of dread when Paulo gave her a rabbit made from pipe cleaners. As a child, Annie had been given the same gift by Eddie, a maintenance man at an amusement park and the man who saved her life from a falling roller coaster car. Eddie died in the accident and she temporarily lost her hand, but Annie remembered nothing of the incident, only carrying a scarred hand from the accident. After leaving her uncle Dennis, Annie and Paulo drove away in their limousine but their driver became lost on the way. They encountered a man who ran a hot air balloon business, Tolbert, with a punctured tire and Annie urged Paulo to help him. Paulo helped Tolbert, who in turn saved Paulo from a speeding car. Once at their hotel, Annie, determined to prolong their wedding night, urged Paulo to take a balloon ride with her, having received Tolbert's business card.

Paulo agreed and they took a balloon ride with Teddy, Tolbert's assistant. Unbeknownst to the couple, Teddy was a novice and did not have Tolbert's permission. His inexperience became evident when the balloon ran into bad weather. The balloon crashed into some trees and Paulo threw Annie out before falling himself. When Annie awakened, she was in a hospital and was told that Paulo's condition was not well. Despite the risks, Annie offered one of her lungs to be implanted into Paulo.

Annie regained consciousness but found herself in a swirl of blue colors and sounds. She had no body and when the blue faded away, she was in a train with a young boy, Sameer. Though she could not talk, Sameer could hear her thoughts. He told her he was the first person she would meet in heaven but he did not tell her anything about Paulo. He was supposed to teach her a lesson and he showed a younger version of him running alongside a speeding train, only to have his arm ripped off when he grabbed a railing. Sameer explained that his accident allowed doctors to work on new methods of replanting limbs. Inspired by his accident, Sameer grew up to become a doctor specializing in re-plantation. He showed her laying in the hospital bed as a young girl, revealing that it was he who operated on her hand. With the revelation, Annie's damaged hand appeared and Sameer reminded her that life is built on the foundations laid by who came before.

He left her and Annie's surroundings changed, turning into a desert. She noticed a pile in the distance and realized they were her body parts. A pack of dogs arrived in a frenzy and took all her body parts, prompting Annie to follow them. The scenery changed and Annie encountered dogs of various sizes sitting obediently in front of rows of suburban houses. An older woman appeared and took Annie on a car ride. While driving, Annie told the story of her childhood, of how she was lonely after the accident and not allowed to go to school for a long time. Moving to Arizona, her mother sensed her loneliness and took her to an animal shelter. Annie took to an injured dog with a collar and took her home. The dog Cleo became her constant companion in life. The woman revealed to Annie that she was Cleo, appearing as a human to better communicate. Cleo reminded her that Annie blessed her with love when she needed it, taking care of the dog when no else would. Annie received her arms and Cleo then turned into a dog once more, embracing Annie. When Annie opened her eyes, she was back in the desert.

With her limbs returned, she was swept up in a storm and landed in a giant hand. She looked up and saw her mother looking at her. The background of Annie's childhood was revealed, as her mother Lorraine came from a small town. Working at a bakery, she longed to leave the town and fell in love with Jerry, a truck driver. They eloped and married but Jerry became abusive and absent over time, even missing Annie's birth. Though Lorraine tried to keep up the marriage, it eventually collapsed. In heaven, Lorraine revealed that Jerry had intended to sue the amusement park on behalf of Annie, prompting Lorraine to move Annie away. In Arizona, Lorraine moved Annie through as schools whenever a hint of their past became known. After graduating from high school, Annie moved in with her boyfriend Walt and did not see her mother for six months. When she did, Annie discovered her mother had developed cancer and maintained a cordial relationship with her till her death.

In heaven, Annie revealed her anger at Lorraine for smothering and embarrassing her throughout her childhood. Lorraine showed her the day of the accident at Ruby Pier and talked about her regret for being there during the accident, as she was with her boyfriend at the time. Lorraine talked about her regret and how it hardened her in their relationship. Annie then revealed her secret, that she had been pregnant but the child, Laurence, was born prematurely and passed. Lorraine acknowledges that Annie had wanted to make that confession for a long time and Annie felt better as a result. Lorraine asked for Annie's forgiveness, and when granted, took her leave, letting Annie know that she need to make her peace. Annie was put in a barrel and went through a waterfall, emerging in an amusement park.

She encountered a grave and met Eddie, the maintenance worker who had saved her years ago. Annie touched his hand and saw his entire life, childhood through his death. Annie told him about her life and how the accident scarred her physically and emotionally. The landscape changed and they found themselves in the Philippines, where Eddie served during World War II. He was imprisoned, and after his escape, he set a village on fire, accidentally killing a girl. The girl, Tala, appeared, and told Annie that Eddie died saving her. Annie then witnessed her accident for the first time. She was overcome by emotion and realized the guilt she felt all her life stemmed from the accident. Eddie told Annie that saving her was his salvation, his atonement for killing Tala, and that she needed to forgive herself for her mistakes. Before parting, Eddie handed her Laurence, her child, and Annie was able to hold him and feel for a moment before he vanishes as well.

Annie then found herself at a wedding scene in her wedding dress. Paulo revealed himself and Annie remembered the entirety of their relationship, how they reconnected after middle school and their romance developed quickly. Annie was distraught that Paulo was in heaven, realizing that she did not save him. Paulo talked about their childhood and how he realized that he felt guilty about leaving Annie alone as a child. Paulo consoled her that, despite his death, Annie showed her true love by donating her lung to him. He told her that she needed to return, and as she was once saved, Annie needed to save someone else. He left her and Annie awoke in the hospital. The news of the accident spread quickly and Tolbert finally summoned the courage to visit Annie. She was pregnant, and to his surprise, very forgiving. Some time later, Annie visited Ruby's Pier, the amusement park of her accident, and found someone who knew Eddie. She talked to Dominguez about Eddie and he gave her the old man's pipe cleaners. When Dominguez asked how it felt to be saved, Annie replied that she was grateful. Annie gave birth to a daughter, Giovanna, and hoped to tell her one day about her life and journey through heaven. Her child would be comforted knowing that five people would be waiting in heaven to help her understand her life.

The Next Person You Meet in Heaven from BookRags. (c)2022 BookRags, Inc. All rights reserved.