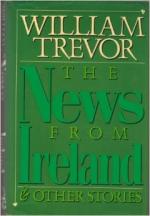 The News from Ireland Discussion Questions

Find out more about the role of the Anglo-Irish in Ireland during the famine years. Do you think the Pulvertafts reflect a typical Anglo-Irish family? Why or why not?

Read "The News from Ireland" as if it were your introduction to the cataclysmic famine that devastated the Irish population in the 1840s, then compare it to a history of that time. How does the story portray the famine? Do you think it is an accurate portrayal?

Imagine that a portion of the story is told through another character's diary entries. Who would you choose to best convey the story, and why?

Find out what caused the devastation of the Ireland's potato crop in the 1840s, and how scientists managed to prevent such devastation from occurring again.

Conduct research to find examples of Irish literature written during the famine years. How do these...