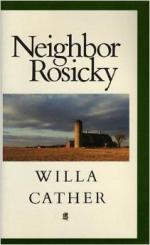 Willa Cather
This Study Guide consists of approximately 58 pages of chapter summaries, quotes, character analysis, themes, and more - everything you need to sharpen your knowledge of Neighbor Rosicky.

"Neighbour Rosicky" begins at the office of Dr. Ed Burleigh where Anton Rosicky learns that he has a bad heart. Readers also learn that Rosicky, a farmer on the Nebraska prairie, is a native of Bohemia, a region in what is today Slovakia. He is sixty-five and has a wife and six children as well as an "American" daughter-in-law. The doctor urges Rosicky to cease doing heavy farming chores.

After Rosicky leaves his office, Dr. Burleigh remembers how he breakfasted at the Rosicky farm the previous winter after delivering a baby for a rich neighbor. His warm welcome there causes Burleigh to reflect that good people such as the Rosickys never seem to get ahead; but he concludes that perhaps they enjoyed their life all the more.

As Rosicky leaves the doctor's office, he starts home but pauses by the "snug and homelike" graveyard that lies...

More summaries and resources for teaching or studying Neighbor Rosicky.

Neighbor Rosicky from Gale. ©2005-2006 Thomson Gale, a part of the Thomson Corporation. All rights reserved.