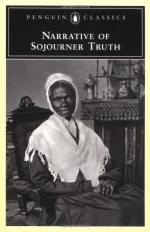 Plot Summary
+Chapters Summary and Analysis
Narrative of Sojourner Truth Entry #1 and 2
Entry #3 and #4 Her Brothers and Sisters, and Her Religious Instruction
Entry #5 and #6, The Auction and Death of Mau-Mau Bett
Entry #7 and #8, Last Days of Bomefree and Death of Bomefree
Entry #9 and #10, Commencement of Isabella's Trials in Life and Trials Continued
Entry #11 and #12, Her Standing with her New Master and Mistress and Isabella's Marriage
Entry #13 and #14, Isabella as a Mother and Slaveholder's Promises
Entry #15 and #16, Her Escape and Illegal Sale of her Son
Entry #17 and #18, It Is often Darkest just before Dawn and Death of Mrs. Eliza Fowler
Entry #19 and #20, Isabella's Religious Experience and New Trials
Entry #21 and #22, Finding a Brother and Sister and Gleanings
Entry #23 and #24, The Matthias Delusion and Fasting
Entry #25 and #26, The Cause of her Leaving the City and The Consequences of Refusing a Traveller a Night's Lodging
Entry #27 and #28, Some of her Views and Reasonings and The Second Advent Doctrines
Entry #29, Another Camp-Meeting
Characters
Objects/Places
Themes
Style
Quotes
Topics for Discussion
Order our Narrative of Sojourner Truth Study Guide

Sojourner Truth
This Study Guide consists of approximately 27 pages of chapter summaries, quotes, character analysis, themes, and more - everything you need to sharpen your knowledge of Narrative of Sojourner Truth.

Olive Gilbert, a white woman, wanting to help Sojourner Truth, transcribed THE NARRATIVE OF SOJOURNER TRUTH for everyone to read. It was first published in 1850 and was reprinted three times between 1878 and 1884.The narrative is a chronological work that is developed as if a diary. Gilbert begins with the birth of Isabella, now Sojourner, and names her parents, James and Betsey. Isabella was never sure of the date of birth. She was born in New York and lived in the North all of her life. Since she was born into a household that spoke Dutch, she only spoke Dutch for much of her younger years. Isabella was one of at least eight children, but she only knew three of her siblings. The older children had already been sold by the time she was old enough to meet and remember them.

Isabella described the way the slaves lived in New England which was in the dark, damp cellars under the big houses. The only daylight they saw was through the cracks in the floorboards. There was no privacy at all. Everyone lived in the one big space.

The narrative makes slavery real and more horrible as Isabella described her parents sitting out a little pine knot that they set afire for light in the evenings and talked to remember their children who had been sold away from them. Isabella remembered her little brother being taken.

Isabella's mother told her children about God. Isabella believed He was in the sky and could only hear someone if the prayer was said aloud. Betsey, the mother, insisted that her children pray and ask God to help them and protect them. She also taught honesty as an important part of their faith. Even if a slave or her children were starving, they would not touch a piece of bread that belonged to the master. The moon and stars were there to remind them that God saw the whole family all over the land. They might not be physically together but the universe saw them and kept them a family. Auctions were a terrible time. Isabella lived through one that took her and her younger brother away from her mother and father. They were the last of the children. Isabella's mother was allowed to remain with her husband because he had been a good slave and was old and needed care. Betsey was to care for him. Unfortunately, Betsey died before James and left him to get along on his own. He lived with a few families before dying.

Isabella's real trials began with the auction. The new master and mistress only spoke English and Isabella did not understand the orders and directions she was given. She suffered every time she did not obey correctly. She was sold from this family to a fisherman's family who owned an inn. She did better with them. The family that followed the fishermen would have been a very good place if the mistress had understood slavery. The mistress had only experienced paid servants and had not ever had slaves. Isabella makes the point that without hope, people are not motivated to work or to better themselves. While they might look just lazy, they have given up. The mistress wanted to see ambition and hard work.

Isabella was married to Thomas. It is pointed out that marriage to a slave means nothing. Thomas had had two wives who had been sold away from him. Isabella and Thomas were married by another slave. A real minister of the gospel could not marry a man and woman whose marriage was a farce. Since the marriage was ended at the whim of a white master, the vows of marriage meant nothing.

Isabella had five children. She tells that her master was a good one. Master Dumont promised to free Isabella a year early. The law was going to free the slaves who were forty the next year. When the time to free her arrived, M. Dumont did not want Isabella to go. She planned and left anyway. She found a family not too far from Dumont who took her in and hired her. When Dumont came looking for her, Mr. Van Wagener paid twenty-five dollars for Isabella and her baby. Mr. Van Wagener was the first white man to tell Isabella not to call him master. He explained that the only master was God, not any man.

Before Isabella left Dumont, he had sold her five year old son to another master. Isabella discovered that Peter, her son, had been sold again and was on his way to the South. Northern Negroes were very fearful of the Southern slaveholders. New York had passed a law to protect the children of the newly freed slaves. If the child lived in New York, he could not be sold to another state. He would achieve his freedom under the New York law. Isabella took Peter's case to court. She found a lawyer who took the case and followed it through. Even though it looked as if she would not get her boy back, eventually, she won the case. The boy had gone South with a woman from the New York area. Later, the man who had been his master as well as the woman's husband would kill the wife. Peter had been saved from a very brutal master.

Isabella has her own epiphany and meets Jesus. Life had grown pleasant for her after she got her son back. She was no longer facing a cruel master or beatings. She did not seem to need God. One holiday season, she became lonely and almost went back to her old master to be with his slaves again. A light stopped her from getting into the old master's slave sleigh. As she realized that God was everywhere and that she was not equal to God, she became afraid and humbled. She knew that someone had to help her. She saw a person that she felt she knew yet did not recognize. She learned it was Jesus. After a while she learned that others knew Jesus too. She was a bit jealous to learn that she was one of many. Isabella moved to New York with Peter. Unfortunately, Peter is now a teenager who joins the wrong crowd and gets into trouble. It takes a couple of years before his crimes are such that he needs to find a way out of the city before he is sentenced to jail. Peter does find a place on a ship with Isabella's help and goes to sea. While Isabella would receive a few letters over the years, she did not see him again. During Isabella's time in New York, she did find a brother and sister. She discovered that she had met another sister in the church she attended. The sister had died before they had realized their relationship.

The next entry of the journal-like narrative is called gleanings. While Isabella tells the writer that she will not tell some of the worst horror stories from fear of reprisal, she tells several very horrific stories of the ways slaves were abused by the white slaveholders. The South claimed that their slaveholders were nothing like the North. The Southerners drew pictures of peace and harmony, rather like a Stephen Foster song. Isabella tells some stories that illustrate the facts of slavery and the real abuse.

Isabella fell into a cult-like group when she met Matthias. Robert Matthew or Matthias came to the home where Isabella worked. He looked like Jesus to her. Her employer, a spiritual man, Mr. Pierson joined with Matthias to start a "real" religion. Matthias was God upon earth and Pierson was John the Baptist. They had their following as all cults do and they had their rules. Isabella gives us a few pages of description and rules for the group. Eventually there is murder in the group and Isabella gets away from their teaching. She was freed again.

Isabella adds an entry on fasting. She tries it because Mr. Pierson was fasting each week. Isabella felt that if Mr. Pierson needed to fast, she should fast twice as much. She says she got lighter and lighter but it seemed to her it was only in her body and not in her mind. In 1843 Isabella left the city to travel and lecture. She changed her name to Sojourner Truth at that time. She went East from New York City into Brooklyn, Long Island, and talked to whoever she could. She stayed with anyone who would take her in. If she had to pay for the night, she would. She would stop and work as necessary to keep on traveling. Isabella traveled all around the area and spoke when she had the opportunity. She gave her testimony and gave her thoughts on how to live as God wants his people to live.

Because Isabella could not read, she had others read the scriptures to her. She liked to have the scriptures read over and over again. With adults reading, they would read the passage a couple of times and then decide to explain what they had read. Isabella liked to have children read to her because they would read the passage as many times as she asked without the commentary.

Isabella happened into a "Second Advent" group in her traveling. The Second Advent philosophy preached that Jesus was coming any minute and life was lived as if it would be over in the next second. Isabella went about her business without arguing with the people but was able to witness to them by her example. Isabella went on moving about and places are mentioned that she visited. At a camp-meeting in Northampton, a group of young men threatened the gathering. Sojourner went into the group and began to sing one of her hymns. Her voice was strong and she gained everyone's attention easily. As the hymn ended, the boys wanted another. She sang a little more after they promised to be quiet and listen or to leave after she sang. She was good at ending trouble before it began.

Gilbert ends with a note about Sojourner's belief that she should not grasp treasures here on earth and that her Christian community would take care of her just as she took care of others all through her life. Gilbert asks what this woman could have done had she not been born a slave.

More summaries and resources for teaching or studying Narrative of Sojourner Truth.