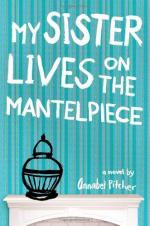 My Sister Lives on the Mantelpiece Summary & Study Guide

Annabel Pitcher
This Study Guide consists of approximately 19 pages of chapter summaries, quotes, character analysis, themes, and more - everything you need to sharpen your knowledge of My Sister Lives on the Mantelpiece.

My Sister Lives on the Mantelpiece Summary & Study Guide Description

My Sister Lives on the Mantelpiece Summary & Study Guide includes comprehensive information and analysis to help you understand the book. This study guide contains the following sections:

This detailed literature summary also contains Topics for Discussion on My Sister Lives on the Mantelpiece by Annabel Pitcher.

My Sister Lives on the Mantelpiece is a novel by English writer Annabel Pitcher. In this novel, Jamie Matthews is ten years old. Five years ago, his sister Rose was killed when a terrorist's bomb blew up a trashcan in Trafalgar Square in London. Jamie's family fell apart in the years that followed. His sister Jas, Rose's twin, struggles to be her own person while his mother chooses to leave to be with another man, and his father is lost in the bottom of a vodka bottle. As Jamie tries to navigate childhood trapped in this bubble of overwhelming grief, he discovers that adults are not always right and that grief can be an all-consuming emotion. My Sister Lives on the Mantelpiece is a coming of age novel that deals with issues that no ten-year-old child should have to navigate. Jamie not only survives but thrives.

Jamie Matthews has a sister named Rose who lives on the mantelpiece in his family home. Every year, Jamie's father tries to empty the urn in which Rose lives into the ocean, but each year he cannot bear part with the ashes. Then, on what would have been Rose's fifteenth birthday, Jamie's mother announces that she has been having an affair with a man she met in a support group and leaves to be with him. In an attempt at a new start, Jamie's father packs up the family and moves to the country.

Jamie likes the new house and the fact that his cat, Roger, can roam free. However, Jamie dislikes his new school. When Jamie arrives at school on the first day, he is forced to sit beside a young girl named Sunya. Sunya is a Muslim. Jamie's father dislikes Muslims, blaming all Muslims for the terrorist bomb that killed Rose. In fact, Jamie's father moved the family to the country to avoid living near Muslims. Now Jamie does not know what he is supposed to do. Sunya makes multiple overtures of friendship but Jamie ignores them all in fear of upsetting his father.

Jamie misses his mother and wishes that she would come for a visit. When he receives a birthday present from his mother, a Spiderman shirt, he decides to wear it until his mother comes for a visit. Jamie wears the shirt every day, refusing to take it off. Finally Jas buys him deodorant to keep him from smelling.

Sunya continues to attempt to befriend Jamie. When Sunya draws a picture of the devil and implies it is their teacher, hanging it in the classroom and making it appear as though a class bully has done it, Jamie cannot help but become her friend. However, when they learn the Ten Commandments and Jamie learns that it is a sin not to honor his mother and father, he begins to ignore Sunya again to honor his father. However, it is not long before Jamie realizes that by disliking Muslims, his father is also breaking a commandment. Unfortunately, it is too late to fix the pain that he has caused Sunya.

On Parents' evening, an event at his school, Jamie is deeply saddened that his mother did not show up. At the same time, Jamie is horrified when his father learns that Jamie has been writing stories about Rose as though she is still alive. When Sunya and her mother arrive, Jamie is embarrassed when his father attacks Sunya's mother for being a Muslim. At home, Jamie is yelled at by his father and then his father disappears for days into a drunken stupor.

Jamie and Jas enter a talent contest. Jas does well and is asked to return by the judges, but she refuses to come back without her brother. Later, they see that their mother was already present. The mother leaves quickly, but not before revealing that she did not give Jamie the tee shirt. Jamie knows that Jas did it.

The next day, Jamie finds Roger dead on the side of the road. Jamie is devastated by the death of his cat. His father helps him bury the cat and then he decides to throw Rose's ashes into the pond at the back of their house. The death of roger has helped everyone have more understanding of death and grief. Later, Jamie and Sunya make up when Jamie saves her from the school bully.

More summaries and resources for teaching or studying My Sister Lives on the Mantelpiece.

My Sister Lives on the Mantelpiece from BookRags. (c)2022 BookRags, Inc. All rights reserved.