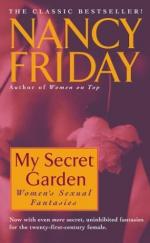 "One of the things I had always admired in my lover was the fact that he was one of the few men who understood that there could be humor and playfulness in bed. But he did not think my football fantasy was either humorous or playful. As I said, he just left." Chap.1 p. 3

"Most people think women's sexual fantasies fill a need, a vacancy; that they are taking the place of The Real Thing, and as such arise not in moments of sexual plenty, but when something is missing." Chap. 2, p. 15

"If you like, you can read almost any female sexual fantasy as a cry of frustration. We are all prepared to think of women, any woman, as potentially frustrated simply because it is our historic sexual role. Traditionally, we are the frustrated sex—less experienced, less mobile, and less accepted sexually." Chap. 2, p. 27