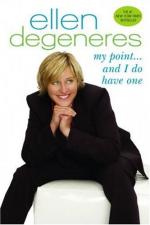 My Point-- and I Do Have One Summary & Study Guide

Ellen DeGeneres
This Study Guide consists of approximately 24 pages of chapter summaries, quotes, character analysis, themes, and more - everything you need to sharpen your knowledge of My Point-- and I Do Have One.

My Point-- and I Do Have One Summary & Study Guide Description

My Point-- and I Do Have One Summary & Study Guide includes comprehensive information and analysis to help you understand the book. This study guide contains the following sections:

This detailed literature summary also contains Topics for Discussion and a Free Quiz on My Point-- and I Do Have One by Ellen DeGeneres.

Ellen DeGeneres describes her book as "a complete, well-rounded, and fleshed-out piece of work," saying that it provides something for everyone in the family to enjoy. The book does not have a plot per se. Instead, the chapters provide comedic episodes and many of these episodes seem to be only loosely attached to any reality. However, Ellen is correct in her assessment that there is something for everyone to enjoy. The book is an enjoyable and easy read.

The book begins with Ellen's search for the truth about her childhood, which she remembers very little about. Unfortunately, her mother remembers even less than Ellen. Apparently, Ellen was not an especially memorable child. A neighbor during her childhood tells the adult Ellen, while she is doing research for her book, that she was "one ugly baby." Perhaps that is why her parents took so few pictures of her in comparison to her older brother, Van, who they seemed to have photographed every thirty seconds. When speaking to her high school guidance counselor about her performance there, he told her that everyone now thinks of Ellen as a bright student. However, the teachers probably only have that opinion since she became a celebrity because he remembers them having to cheat in order for her to graduate.

Although most of the book, "My Point and I Do Have One," ranges from light silliness to a comedy of the absurd, Ellen does make a few points that seem to be based in reality. She offers genuine opinions and concern about these issues. Ellen's love of animals and her strong stance for animal rights comes through loud and clear. She is an advocate for all animals and she detests the use of animals for any testing. Ellen wonders why animals have to be used to test make-up since they will never wear it. Instead, condemned murders should have to try the stuff out. Her dislike of zoos and aquatic parks is also offered with clarity. Despite wrapping this message in comedy, there is no doubt that she is genuine in her love and advocacy for both wild and domestic animals.

Ellen also speaks of her fear of flying and her fear of making an idiot out of herself. Again the comedy does not totally disguise that these subjects are genuine issues to her. She discusses her hope of being accepted as she is. She gives some attention to appearance, the sub-text of which points to a person who deals with being uncomfortable with her own appearance. Again, although the subject is offered amidst funny commentary, a seriousness can be detected about self-worth and self-image. She also sends a serious message to youngsters. She tells them to do better in school than she did because knowledge is power. She says that a person needs as much power as possible in order to be successful. Written in 1995, Ellen does not venture into any contentious aspects of her life that surface later and keeps the subject matter light, general and non-controversial.

More summaries and resources for teaching or studying My Point-- and I Do Have One.

My Point-- and I Do Have One from BookRags. (c)2022 BookRags, Inc. All rights reserved.