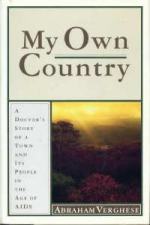 My Own Country: A Doctor's Story of a Town and Its People in the Age of AIDS Summary & Study Guide

Abraham Verghese
This Study Guide consists of approximately 30 pages of chapter summaries, quotes, character analysis, themes, and more - everything you need to sharpen your knowledge of My Own Country.

My Own Country: A Doctor's Story of a Town and Its People in the Age of AIDS Summary & Study Guide Description

My Own Country: A Doctor's Story of a Town and Its People in the Age of AIDS Summary & Study Guide includes comprehensive information and analysis to help you understand the book. This study guide contains the following sections:

This detailed literature summary also contains Topics for Discussion and a Free Quiz on My Own Country: A Doctor's Story of a Town and Its People in the Age of AIDS by Abraham Verghese.

In the summer of 1985, a young man driving from New York to Johnson City, Tennessee, becomes ill and is taken to the Johnson City Medical Center - known to staff as the Miracle Center - where a nurse, Claire Bellamy, realizes that his condition is serious and calls for help. Ray, a pulmonary doctor, soon comes to believe the young man has AIDS and the staff is horrified at the possibility of exposure. Abraham Verghese, author and internist, comes to Johnson City later where he hears about the young man - the city's only real case of AIDS. Abraham soon becomes the area specialist on AIDS and the related symptoms, drawing patients from around the region as AIDS becomes more prevalent in the area.

Abraham's first AIDS case is the brother of a young nurse named Essie. The young man, Gordon, has lived away from home for a long time and was already sick when he returned home. Essie immediately recognizes the ravages of the disease and calls on Abraham. After Gordon, Abraham begins seeing AIDS patients on a regular basis. These include Ed Maupin and Bobby Keller. They are gay and live together and both test positive for AIDS. Ed soon gives in to the disease and though Bobby urges that there be no heroic measures, Ed's brothers refuse to allow that, and Ed is on a ventilator for a short time before dying. Bobby lives for some time but dies before Abraham leaves Johnson City.

Abraham comes to realize that at least part of his discomfort is a fear that he doesn't have the roots that so many of his friends exhibit. Abraham also comes to realize that he is lacking the concrete faith in God exhibited by others, including a man named Will Johnson who was infected during a transfusion after a heart attack. Will declares a complete faith in God. As Abraham treats Will Johnson and his wife, Bess, who has also been infected, Abraham comes to realize that he has not been nearly as unbiased as he'd believed himself to be. Though Will could easily have become angry at the disease, he tells his son that no one - regardless of their sins - deserves this disease.

Abraham is soon the primary care physician for some fifty patients, and he begins to have problems on several fronts, not the least of which is the fact that his marriage is in trouble. By now Abraham has two sons and his wife, Rajani, feels that Abraham hasn't set his priorities so that his family takes an important role in his life. In fact, Abraham has come to the point that the constant struggle of dealing with the virus and its victims is weighing heavily on him. He eventually leaves Johnson City for a less stressful job in Iowa, hoping to give himself and his family a chance to recover.

More summaries and resources for teaching or studying My Own Country: A Doctor's Story of a Town and Its People in the Age of AIDS.

My Own Country: A Doctor's Story of a Town and Its People in the Age of AIDS from BookRags. (c)2022 BookRags, Inc. All rights reserved.