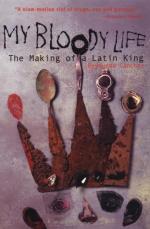 My Bloody Life: The Making of a Latin King Summary & Study Guide

My Bloody Life: The Making of a Latin King Summary & Study Guide Description

My Bloody Life: The Making of a Latin King Summary & Study Guide includes comprehensive information and analysis to help you understand the book. This study guide contains the following sections:

This detailed literature summary also contains Topics for Discussion and a Free Quiz on My Bloody Life: The Making of a Latin King by Reymundo Sanchez.

My Bloody Life is Reymundo Sanchez's frank memoir of growing up as a member of the Latin Kings, Chicago's largest and most violent Latino gang. In what is ultimately a very sad story, the young boy who is the target of his parents' violence turned into a violent young man with no education or skills. Reymundo was a lost boy. His elderly father died when he was four, and his teenaged mother lived with a succession of violent men in Puerto Rico and the U.S. Both his mother and her boyfriends beat Reymundo unmercifully. At thirteen, his mother kicked him out and Reymundo started hanging out at the gang clubhouse because he was homeless.

Although domestic violence ruined Reymundo's family life, gang violence brought all the good things into his life. After a hit on a rival gang, he was welcomed into homes of gang members. They fed him, gave him alcohol and drugs, and praised him lavishly. Only through violence could Reymundo find the approval and acceptance of an older man that he so craves. Most of all, violence brought friends and a sense of belonging to a family into his life for the first time. The gang became his family and his support group. His six-year tenure in the gang is one long crime spree.

Gradually as Reymundo matured, he realized the harsh truths behind gang life. Street soldiers spent most of their time seeking out members of other gangs and shooting at them. The youngest gang members risked their lives and sold drugs, while the oldest gang members lived lavishly on the profits, far away from the fighting. Despite claims of undying loyalty, gang members did not really care about each other. Reymundo had value to the gang only when he was shooting at people, engaged in "hits" against rival gangs. He became aware of the inequities of gang life, but it would be years before he saw a way out.

When Reymundo first joined the Latin Kings, loyalties were split along racial lines with the Puerto Rican Kings fighting the white Gaylords and the African American Vicelords. Soon, the Kings were at war with other Latino gangs, including the Spanish Cobras, Spanish Lords and Gangster Imperials. Eventually the Latin Kings united with the Gaylords, Vicelords and Insane Unknowns to become the Peoples. Their sworn enemies were the Spanish Cobras, Spanish Lords and the Imperial Gangsters, united into a group called the Folks. The police seemed to intentionally incite gang wars by picking up gang members and dropping them off in neighborhoods controlled by competing gangs. Twice, Reymundo saw a high-level gang leader pay off a police sergeant or detective. At the peak of the gang wars, anyone living in the wrong neighborhood was fair game and even a grandmother who happened to be wearing the colors of an opposing gang would be gunned down. Gang members had no hesitation killing children in other neighborhoods because they assumed the kids would eventually grow up to be members of a rival gang.

The only way to get out of the gang was to endure a brutal, often fatal beating. Still, at eighteen, Reymundo wanted to leave the gang and go to college. He confronted D.J., the new King leader, who treated Reymundo with respect. Reymundo endured the beating, said goodbye to his gang girlfriend Loca and walked out of the park. Behind him, he heard shots. Loca was wounded and her young son Angel instantly killed. At first Reymundo vowed to avenge Angel, but realized it is more important to end the vicious cycle of revenge and violence forever.

My Bloody Life: The Making of a Latin King from BookRags. (c)2022 BookRags, Inc. All rights reserved.