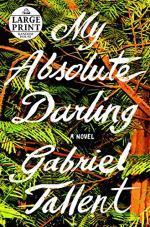 Tallent, Gabriel
This Study Guide consists of approximately 69 pages of chapter summaries, quotes, character analysis, themes, and more - everything you need to sharpen your knowledge of My Absolute Darling.

This detailed literature summary also contains Quotes and a Free Quiz on My Absolute Darling by Tallent, Gabriel.

The following version of the novel was used to create this study guide: Tallent, Gabriel. My Absolute Darling. Riverhead Books, August 29, 2017. Kindle.

In My Absolute Darling by Gabriel Tallent, Martin Alveston prepared his 14-year-old daughter Julia “Turtle” Alveston to be able to survive her worst nightmare. However, he probably never dreamed that he would be that nightmare. Because Turtle was raised by her father, a man who believes the world is due for an apocalypse, Turtle knows more about guns and survival skills than gossip and vocabulary. It is not until she helps out two teen boys who are lost in the woods that Turtle gets an idea of what kind of life she could have without her abusive father. When Turtle realizes that her father is capable of killing everyone she cares about, Turtle vows that she will protect them even if it means killing him.

Turtle knows little of the world beyond her life with her abusive father. She believes that he is right when he tells Turtle that she is stupid and ugly. He warns her to be careful talking about her home life at school because of she tells too much she will be taken away from him. As a result, Turtle has no friends at school and keeps to herself. The only people with whom she interacts are her father and her grandfather, Daniel. Though Turtle’s grandfather has tried to convince Martin that he is not raising Turtle the way he should, Martin does not listen to him. It is not until Turtle’s grandfather sees the bruises on Turtle’s legs where Martin beat her that Daniel realizes that Turtle is being physically abused. Daniel visits Martin with the intention of taking Turtle away from him. However, Daniel has a fatal stroke as a result of the stress of the encounter.

When Turtle’s father abuses her, she has a habit of running away as her way of revolting against the abuse. One time when Turtle runs away she happens upon some high school aged boys, Brett, and Jacob, who had intended to camp in the woods but had gotten lost. Turtle is concerned for the boys and offers to help them even though she is afraid of them. The three become friends that night. Turtle wonders for the first time what school might be like if she had friends she could talk to and count on for help with her classes.

That summer, in his distress after the death of his father, Martin abandons Turtle for a period of three months. During that time Turtle spends her days with Brett and Jacob. She forms a particularly strong bond with Jacob, especially after they are swept out to sea while trying to catch eels at Buckhorn Cove. The two depend on Turtle’s survival skills to keep them alive until the tide is low enough they can get back to land. Jacob confronts Turtle about the way her father abuses her, but Turtle refuses to acknowledge there is abuse. She tells Jacob he does not understand her way of life enough to tell her that she needs to leave.

When Martin returns home, Turtle’s life takes a turn for the worse. Martin has brought with him Cayenne, a nine or ten-year-old girl who he claims was being abused. Martin plays Turtle and Cayenne against one another, but the girls bond despite his attempt to make them hate each other. Martin had been sexually abusing Turtle, but she begins to refuse him because she has started her period and fears that she might get pregnant. One night when Turtle refuses Martin he decides to rape Cayenne instead.

Turtle knows that she will not be able to live with herself if she does not try to stop Martin from hurting Cayenne so she interrupts the rape. She had believed that Martin would back off when she came at him with the gun. Instead, he chokes her, intending to kill her. When Turtle manages to get free of Martin, she knows that he will kill both Cayenne and Jacob as a punishment. She runs away and takes Cayenne with her, but Martin pursues them. Turtle kills her father that night, knowing it is the only way to ensure the safety of those she loves.

Turtle is not only choked by her father that night, but he also shoots her three times as she tries to escape from him. The ending of the novel outlines Turtle’s attempt to come to terms with her feelings of both love and fear of her father as well as her journey of physical healing. In the same way that Turtle pushed herself to survive while she was being abused by her father, Turtle pushes herself to heal and learn to live again after her father is gone.

More summaries and resources for teaching or studying My Absolute Darling.