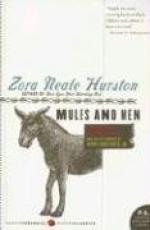 Zora Neale Hurston
This Study Guide consists of approximately 30 pages of chapter summaries, quotes, character analysis, themes, and more - everything you need to sharpen your knowledge of Mules and Men.

This detailed literature summary also contains Topics for Discussion and a Free Quiz on Mules and Men by Zora Neale Hurston.

Zora Neal Hurston says that she is relieved when someone tells her that she should go collect folk stories of the blacks of the Deep South. With a financial backer and an idea of where she wants to travel, she sets out to do just that. Upon arriving in Eatonville, Florida, she tells friends that she's come to record their biggest lies. The stories almost immediately begin to flow and Hurston begins making record of the stories and the storytellers.

Many of the stories focus on the days of slavery when a particular black slave - often named John - manages to outsmart a white master. Other stories explain aspects of everyday life, from the reason the dolphin's fin is "crosswise" to the reason dogs chase rabbits. Still other stories focus on legends. There is the slave with incredible strength who kills the Devil and is then refused admission to either Heaven or Hell, and the man who outwits the Devil and manages to marry his daughter. Still others are tall tales. As one story goes, there was a man who uses a single shot from his muzzle loader to kill turkey, partridges, a deer and ducks.

Hurston doesn't merely relate the stories but tells them as they were told to her. Typically there is a group of people gathered to hear the stories along with Hurston. The stories are sometimes prompted by other stories and the conversations are sometimes reduced to one-liners aimed at each other or at telling the biggest lies. These range from the stories of the ugliest men and the meanest bosses - including the man who didn't die but simply "uglied away."

Hurston spends time in different communities in order to reach a cross section of the culture and to learn new stories. She finds herself involved in a brawl in one town and participates in a fishing trip in another. She admits that she could spend a great deal more time on the topic of folklore but that she has other work to do.

Hurston then turns her attention to the stories of hoodoo. She travels to New Orleans, and there spends time with some of the hoodoo masters, including relatives of the famous hoodoo practitioner, Marie Leveau. She learns about spells and conjures and goes through a series of initiations in order to continue her studies. She relates stories of the power of hoodoo, including the man who sought revenge against the wealthy planter who had killed his daughter. Hurston also relates some details about ghosts, such as the fact that ghosts never cross water.

More summaries and resources for teaching or studying Mules and Men.