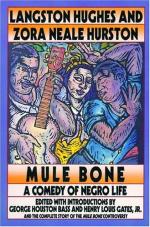 This scene takes place in the Macedonia Baptist Church, where Joe Clarke presides over Jim's trial. The congregation is divided visibly between Methodists and Baptists. The tension over the religious issues heats up once more, and mayhem ensues. Joe's attempts at establishing order are thwarted by the barbs tossed about by Deacon Simms and Reverend Childers representing their respective affiliations.

Joe calls for a show of witnesses to the assault. Most of the congregation stands to testify, not because they had been present at the scene, but because their religious convictions spur them to do so.

When testimony finally begins, Daisy is named as the source of the argument between Jim and Dave. Daisy's mother vehemently protests the mention of her daughter, whom she has raised to be a lady. Each time someone begins to mention Daisy in the proceedings, her...