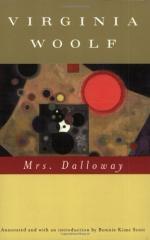 Virginia Woolf's Mrs. Dalloway, published in 1925, was a bestseller both in Britain and the United States despite its departure from typical novelistic style. Mrs. Dalloway and Woolf's subsequent book, To the Lighthouse, have generated the most critical attention and are the most widely studied of Woolf's novels.

The action of Mrs. Dalloway takes place during a single day in June 1923 in London, England. This unusual organizational strategy creates a special problem for the novelist: how to craft characters deep enough to be realistic while treating only one day in their lives. Woolf solved this problem with what she called a "tunneling" technique, referring to the way her characters remember their pasts. In experiencing these characters' recollections, readers derive for themselves a sense of background and history to characters that, otherwise, a narrator would have had to provide.

In a sense, Mrs. Dalloway is a novel without a plot. Instead of creating major situations between characters to push the story forward, Woolf moved her narrative by following the passing hours of a day. The book is composed of movements from one character to another, or of movements from the internal thoughts of one character to the internal thoughts of another.

Mrs. Dalloway has been called a flâneur novel, which means it depicts people walking about a city. (Flâneur is the French word for a person who enjoys walking around a city often with no other purpose than to see the sights.) The book, as is typical of the flâneur novel, makes the city, its parks, and its streets as interesting as the characters who inhabit them.

Clarissa Dalloway's party, which is the culminating event of the book, ties the narrative together by gathering the group of friends Clarissa thinks about throughout her day. It also concludes the secondary story of the book, the story of Septimus Warren Smith, by having Dr. Bradshaw arrive at the party and mention that one of his patients committed suicide that day.

The book's major competing themes are isolation and community, or the possibilities and limits of communicativeness, as evidenced by Clarissa's abiding sense of being alone and by her social skills, which bring people together at her parties.