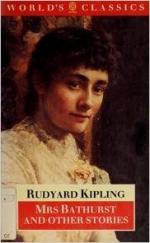 Research the history of film from its development in France and America to its popularity before World War I. How did movies affect the lives of the general public?

Identify as many missing details in the story as possible and fill in these gaps, based on evidence from the text, historical context, and what you think may have happened.

In the late nineteenth century, Britain was a major empire, with colonies all over the world. Research the Boer War (1899-1902), using history textbooks or historical books in your library. In what ways did that war affect the British empire?

Research either the realism or modernism movements, using encyclopedias available in your school's library. Write down the major features of the movement you select. Which features are evident in "Mrs. Bathurst" ?