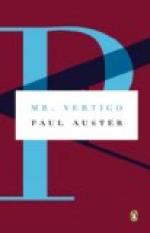 This Study Guide consists of approximately 36 pages of chapter summaries, quotes, character analysis, themes, and more - everything you need to sharpen your knowledge of Mr. Vertigo.

Cibola is a fictional small town in Kansas. Master Yehudi owns a small farm on the outskirts of Cibola, where he brings Walt to live. Walt is unhappy with how rural Cibola is, and he misses urban Saint Louis, where he was born and raised. However, Walt eventually becomes accustomed to Cibola. Marion Witherspoon is also a resident of Cibola. One day, local members of the Ku Klux Klan kill Aesop and Mother Sioux, so Yehudi and Walt leave Cibola permanently.

Saint Louis is one of the most populous cities in the state of Missouri. Walt was born in Saint Louis and was raised by his aunt and uncle after his parents died. Walt is an avid fan of the St. Louis Cardinals baseball team. Walt leaves Saint Louis at the age of nine, when Master Yehudi takes custody of him. As far as...

More summaries and resources for teaching or studying Mr. Vertigo.