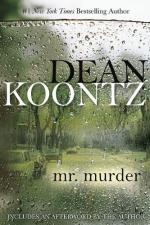 Dean Koontz
This Study Guide consists of approximately 55 pages of chapter summaries, quotes, character analysis, themes, and more - everything you need to sharpen your knowledge of Mr. Murder.

Mr. Murder by Dean Koontz begins with a mystery writer and his family. Marty Stillwater is a published author, recently interviewed by People Magazine, who loves his family and appreciates his privacy. When he begins having fugue-like losses of time, he and his wife Paige are worried enough to send him to a physician, but the source of his blackouts and missing time have nothing to do with stress. On the other side of the country, a killer with Marty's DNA is working as a highly efficient assassin for a secret government agency. His targets are unknown to him, as is his past, his history, his family, or his life to date. Alfie is a blank slate. He's learned everything he knows from the programming he's received and the movies he has seen during his 'down time'.

The killer has a special link to Marty that goes deeper than any surface connection. He is able to tap into Marty and locate him easily, and without knowing why, is drawn to him in his home in California. He breaks protocol and ditches the Network's tracking devices, driving across the country to satisfy some unknown need he feels. The psychic pull takes him right to Marty's home, and when he sees Marty for the first time, he becomes convinced that Marty must be an alien clone of some kind who has stolen his life - his wife, and his children. He begins a violent campaign to regain his life and his family, willing to kill anything and anyone who gets in his way. Hunted by the Network and his handlers, Alfie engages Marty in a confrontation that has the Stillwater family fleeing their home and leaving everything they know behind. While evading his handlers, Alfie chases Marty to Mammoth Falls where he meets 'his' parents for the first time, but disappointed by their lack of support by his standards, he kills them believing they are clones as well. Now all that remains is to discover whether or not his wife and children have been cloned as well. With memories created only from movies he has seen, he writes himself as the hero, and using his favorite heroes as templates for his own behavior, he sets out to save the world from the aliens that are the Stillwater family.

In a violent confrontation, Alfie is finally killed by one of his handlers and then a spy within the Network reveals himself by killing his partner and saving the Stillwater family. Dean Koontz does a wonderful job of blending the science fiction of Frankenstein with the best of government conspiracies to create a blend that somehow meets in the middle.

More summaries and resources for teaching or studying Mr. Murder.