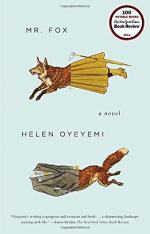 Helen Oyeyemi
This Study Guide consists of approximately 49 pages of chapter summaries, quotes, character analysis, themes, and more - everything you need to sharpen your knowledge of Mr. Fox.

NOTE: Due to the structure and nature of the novel, this study guide references page numbers. This guide specifically refers to the November, 2012, First Riverhead trade paperback edition.

“Mr. Fox,” a novel by Helen Oyeyemi, is about reality and creativity. The author weaves messages about love and identity throughout the story, too. The main character, Mr. Saint John Fox, a fiction writer, seeks to repair his relationship with his wife, Daphne, as he contends with his invented muse, Mary Foxe. When the novel begins, Mary Foxe appears to Mr. Fox for the first time in seven years. Mary is unhappy with Fox for always killing the women in his stories. Fox wonders why it has been so long since he has seen Mary. Mary tells Fox that he does not take his fiction seriously enough, while he contends that fiction is only a game. It seems that Fox’s marriage has hit a rough patch because his wife Daphne suspects him of having an affair.

Mary Foxe and Mr. Fox challenge one another to games by way of short stories that they craft. Mary wants to soften Fox’s heart toward women and help him to better understand love. Mr. Fox takes neither his writing nor his romantic life seriously. He is quick to quit things. However, he is quick to try to prove that he does not quit anything without reason. Fox’s first story, “Dr. Lustucru,” features a talkative woman unwilling to compromise. Consequently, her head is cut off and only reattached for conversations. This backfires, however, as the woman comes to repeat the same thing over and over again. Eventually, she flees. Next, Mary Foxe takes control by telling a story of a young, aspiring female writer who seeks out the advice of an older, handsome, but dismissive male writer. The male writer stands up to the young writer. He instructs his secretary to burn the young writer’s stories.

Fox and Mary Foxe put their souls and hearts into these stories as the novel progresses. Each story slowly becomes less violent on Fox’s part and more sympathetic on Mary Foxe’s part. Fox comes to take a greater interest in his stories. He stops killing his female characters, while Mary Foxe’s stories become more open to compromise. Eventually, love develops between the characters Foxe and Mary Foxe base on themselves. When this happens, Daphne suspects that Mary Foxe is real, and she accuses her husband of having an affair. Fox insists Mary is only made-up, which Daphne accepts but does not completely believe. The lines between reality and fiction have been blurred. They become even more blurred when Daphne herself begins to see Mary. She also has conversations with Mary Foxe.

Both Mary Foxe and Daphne come to realize they are in love with the same man. Daphne is intensely jealous because she is competing with an invented woman. Mary Foxe longs to be an independent, real creation that can both love Fox and live her own life. Fox genuinely feels bad that Daphne believes he would prefer her over an invented character, though he tells Mary that he would run away with her if she were real. Mary urges Fox to go back to his wife instead. Fox slowly comes to realize that he truly does love his wife. He writes the story so that Mary is free to leave. Fox and Daphne decide to start over again, as both realize just how much they love one another.

More summaries and resources for teaching or studying Mr. Fox.