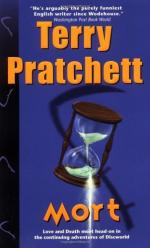 Terry Pratchett
This Study Guide consists of approximately 43 pages of chapter summaries, quotes, character analysis, themes, and more - everything you need to sharpen your knowledge of Mort.

This detailed literature summary also contains Topics for Discussion and a Free Quiz on Mort by Terry Pratchett.

Mort, by Terry Pratchett, is a satirical comedy about how Death takes young Mort from the fields, teaches him to collect souls, and takes a holiday to experience human pleasures. In Death's absence, Mort prevents an assassination and needs strong magic to repair the rift in history. Death spares his wayward apprentice and returns to work.

Mort, an awkward, well-intentioned, and inquiring young farm boy apprentices to Death and accompanies him to his home in another dimension. There he meets old Albert, Death's reclusive butler, and Ysabell, Death's unattractive, adopted daughter. The first time he accompanies Death on "The Duty"—harvesting souls, Mort tries to interfere and is told that people's fates are in the hands of the gods. He is perplexed to be able to walk through solid walls. Allowed to solo, Mort prevents Princess Keli's assassination and learns that history considers her dead and that the ramifications of his action are dire. Keli enlists the young wizard Cutwell to remind people that she is not dead, but people believe what they know, rather than what they see and hear. Mort wants to confess but falters, and Death sends him out again on The Duty. Mort notices a hazy, sizzling "Dome of Reality" steadily advancing on Keli in Sto Lat. They should accept reality, but cannot. Mort slowly and chillingly takes on Death's attributes and attitude.

Death take a holiday, fishing, dancing, gambling, and drinking, while Keli decides that if people will not accept that she is alive, she can at least die nobly as a monarch. With growing sagacity, Mort assures her there is nothing noble about dying. Cutwell's magic is too weak to prevent the dome's victory, but reading over Cutwell's shoulder in a magic book, Mort recognizes Albert as the Great Magus and convinces Ysabell to help force Albert to provide an efficacious spell. Ysabell accompanies Mort on his last Duty, while Albert dons wizard clothing for the first time in 2,000 years and transports himself to Unseen University. Death, meanwhile, is finding happiness working as an extremely fast short order cook.

At UU, Albert enlists eight wizards to perform with him the "Rite of AshkEnte." This simple incantation to summon and control Death becomes a dramatic event. Mort, his apprenticeship over, has become so Death-like that he is sucked in first. Albert sends him back, and Death is plucked from his kitchen. Albert cannot reach his staff in time to bind Death and again becomes his butler. Death knows the universe is in danger.

A stampeding, sacrificial elephant interrupts Keli's coronation and reality is too constricted to risk using the spell, so Mort whisks Keli off to Death's domain, where he and the angry, betrayed Master fight a titanic duel. Mort fails to press his advantage and sees the last grain of sand slip through the hourglass of his life, when a bit of humor makes Death spare him. Mort becomes Death's son-in-law and the Duke of Sto Helit, helping the new Queen establish the peace that unmodified history demands.

More summaries and resources for teaching or studying Mort.