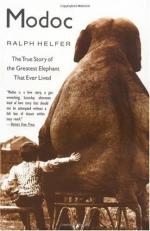 Modoc: The True Story of the Greatest Elephant That Ever Lived Summary & Study Guide

Ralph Helfer
This Study Guide consists of approximately 33 pages of chapter summaries, quotes, character analysis, themes, and more - everything you need to sharpen your knowledge of Modoc.

Modoc: The True Story of the Greatest Elephant That Ever Lived Summary & Study Guide Description

Modoc: The True Story of the Greatest Elephant That Ever Lived Summary & Study Guide includes comprehensive information and analysis to help you understand the book. This study guide contains the following sections:

This detailed literature summary also contains Topics for Discussion and a Free Quiz on Modoc: The True Story of the Greatest Elephant That Ever Lived by Ralph Helfer.

Modoc: The True Story of the Greatest Elephant That Ever Lived is the tale of a boy and his elephant coming of age and experiencing more in their lifetimes than most people can only dream of. Though at time life is tragic, Bram Gunterstein and Modoc, his elephant triumph over every bit of adversity that comes their way, living happily into old age together.

Bram Gunterstein is born on a farm in Germany, the same day as an elephant calf, Modoc. The son of an elephant trainer, Bram grows up surrounded by the large animals, but shares a special bond with Modoc, one that his parents, Josef and Katrina encourage. An example of this is given when Bram falls seriously ill in the night and Modoc senses it, alerting Josef to the fact in time for Bram to be taken to the hospital and saved. Bram's youth is filled with loving moments and wonderful memories, growing up in the circus family. Sharing his life and Modoc's with the sideshow people, and encouraged by his parents, Bram flourishes, living a charmed life.

Bram meets his first love, Gertie, and the two share a special closeness, though Gertie knows that she will always have to share Bram's love with Modoc. The sale of the circus brings this home sooner than the young lovers can imagine, when Mo is sold to Mr. North and will be sent to America. Bram had promised his father on his death bed that he would always take care of Modoc, and he feels that he must go with the elephant.

Bram and Modoc's adventures begin at sea when a monsoon hits and the ship is destroyed. Lost at sea, Modoc still manages to find Bram and save him as well as many others. Rescue comes just in time and Bram and Modoc are taken to an Elephantarium run by the maharajah. There, Bram learns to lead an even more spiritual life, becoming one with nature and developing an even closer relationship with Modoc. The two live happily until word reaches Bram that Mr. North has discovered his whereabouts and is coming for them. Bram sadly leaves his friends and sets out across India to evade the circus owner.

More adventures follow, with Bram fending off thieves who wish to take Modoc and Mo killing the men that would have killed Bram. The two wind up in a remote village working in the teak forests and Bram meets the second love of his life, Sian. Though Sian's family is reluctant to have her marry Bram at first, the happily agree when they learn of his special relationship with the maharajah. Bram and Sian spend some happy years together until tragedy strikes once again.

Sian is killed when guerrillas invade the village and take the elephants in order to escape an approaching army. Bram is devastated at his loss and Modoc is injured in the process. Recovering in a nearby village, Bram is stunned when he discovers Mr. North is there waiting for him. North hates Bram, but knows that he will never get the great Modoc to perform without her friend. Bram and Modoc eventually wind up in America together after all, working for Mr. North.

In America, Bram and Modoc succeed in entertaining the people and make Mr. North very happy. Bram teaches Modoc the routine he has dreamed of and Modoc stuns the world by performing without a trainer. Bram and Gertie reunite and marry, working in the circus together, happy for many years. Life seems to have finally settled down for all, when on a fateful night, Modoc is attacked by a drunken man. The man blinds Modoc, who kills the man in self defense. Branded a killer and therefore useless to Mr. North, Modoc is sold by a deceitful Mr. North, separating the elephant and Bram for the first time.

Many years pass and Modoc is purchased by Ralph Helfer to perform in the movies. Ralph saves her from a horrible life, tied to a tree where stones are thrown at her by local children, a place where no one has touched her for years. Ralph takes Modoc back to his ranch and heals her with time and patience. Though Modoc has finally found a place to be safe, her life is still missing something. That something, Bram, arrives after years, having never given up his search for his best friend.

Bram and Modoc live the remainder of their lives working for Ralph, happy just to be together again. As they age, Bram tells Modoc that their time will come to cross over and be with their loved ones again. Bram tells Modoc not to go before him, as he does not want her to be alone on the other side. As always, Modoc listens, and passes away after Bram.

The two, together forever, unable to be kept apart no matter what life throws at them, prove that love is eternal and cannot be destroyed by others, no matter what the case.

More summaries and resources for teaching or studying Modoc: The True Story of the Greatest Elephant That Ever Lived.

Modoc: The True Story of the Greatest Elephant That Ever Lived from BookRags. (c)2022 BookRags, Inc. All rights reserved.