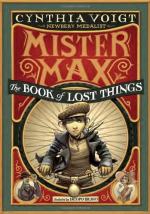 A bellhop from the Hotel Excelsior delivered a small packet to the home of William and Mary Starling of the Starling Theatrical Company at 5 Thieves Alley. The Starlings have a son named Maximilian. The bellhop has no idea of what he has started.

Chapter 1: In Which a Surprising Invitation Arrives and Plans Are Made

William brought the packet into the dining room where Mary and Max were eating Sunday breakfast. William opened the packet and pulled out two envelopes. One of the messages said that a great adventure awaited them. Since the theatrical company had a full schedule through the middle of September, Mary pointed out that they had no time for adventures. William read the rest of the letter. They had been invited to spend several months with the Maharajah of Kashmir. The Maharajah wanted them to create a...

(read more from the Prologue and Chapters 1 - 5 Summary)