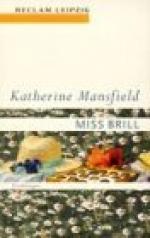 Katherine Mansfield
This Study Guide consists of approximately 35 pages of chapter summaries, quotes, character analysis, themes, and more - everything you need to sharpen your knowledge of Miss Brill.

1920s: Few professions other than nursing and teaching are deemed socially acceptable for women who must support themselves.

Today: College graduates are as likely to be female as male, and a majority of women are employed in the workforce and in virtually every profession.

Today: Social conventions regarding dress are relaxed. Hats and gloves are uncommon in many circles, and pants are a staple of most women's wardrobes. Many believe fur to be a symbol not of status but rather an indication of cruelty and conspicuous consumption.

1920s: Common forms of recreation include reading, going to the theater, and gathering in public places such as parks or pubs. People often dress...

More summaries and resources for teaching or studying Miss Brill.

Miss Brill from Gale. ©2005-2006 Thomson Gale, a part of the Thomson Corporation. All rights reserved.