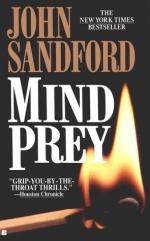 John Sandford
This Study Guide consists of approximately 39 pages of chapter summaries, quotes, character analysis, themes, and more - everything you need to sharpen your knowledge of Mind Prey.

This detailed literature summary also contains Topics for Discussion and a Free Quiz on Mind Prey by John Sandford.

Mind Prey is John Sandford's seventh novel featuring Lucas Davenport. In Mind Prey, Lucas is called in on a kidnapping case involving the daughter of wealthy businessman Tower Manette. Lucas begins the case focusing on greed as a motive, but begins to believe a patient of psychologist Andi Manette may behind the kidnapping. This instinct seems to be confirmed when Mail begins calling Lucas, giving him cryptic hints to the well being and location of Andi and her daughters. Mind Prey is perhaps the most haunting of Sandford's Prey series, keeping readers on the edge of their seats until the final page.

Andi Manette and her daughters are leaving a parent-teacher conference when a man forces them into a van. The man turns out to be John Mail, a patient Andi treated in prison at the beginning of her psychiatrist career. Within minutes the police are on the scene of the kidnapping, beginning to put together the evidence in a way they hope will help them find Andi and her daughters. Lucas Davenport, deputy chief and game designer, is one of the best detectives in Minneapolis and he has joined the case. Lucas begins by interviewing Andi's father, a wealthy business man, and her husband, also a very wealthy real estate developer. Lucas's first thought is a crime of greed, but it is too early to be sure.

Lucas spends the first night interviewing witness and speaking to people close to Andi. One of these interviews yields the detail that Mail was wearing an obscure t-shirt associated with a gaming convention. Lucas visits a friend at a local game store where he meets Mail but is unaware of who the man is until he is already gone. Lucas helps develop a better description of Mail with the help of his game store friend, but is still no closer to discover Mail's true identity.

Lucas has a team of investigators begin searching through Andi's patient files, much to the chagrin of her partner, in hopes that one of them might offer a clue to the identity of Mail. At the same time, Mail begins calling Lucas. The first call gives Lucas a clue to a location. When Lucas checks out this clue, it is discovered that Mail has left him a gift. An oil barrel as been left at the location with a doll inside, suggesting that one of Andi's daughters has been killed. In fact, Mail did take the youngest of Andi's daughters and promised to drop her off at a local mall, but the child has not been heard from since.

As Lucas continues his investigation, Mail begins a campaign of terror against Andi, forcing his sexual fantasies on her. Andi endures these rapes, but they begin to take a toll on her sanity. Andi also becomes frightened that Mail will begin turning his attention on her oldest child, Grace. Andi begins looking for something, anything, that can be used as a weapon. Andi spots a nail in a beam on the ceiling. Andi and Grace begin working the nail out of the wood together, devising a plan to use it when the opportunity presents itself. The nail is deeply embedded, however, and they begin to despair at the chance they will ever be able to remove it. Then Grace lays on the mattress provided to them and discovers a broken spring. Andi pries two of these springs out of the mattress and they sharpen them, not only to help remove the nail, but to use as weapons as well.

Lucas continues to speak with Mail on his cell phone, receiving clues at Mail's whim. One clue warns of a trap. A short time later, Mail contacts George Dunn, Andi's estranged husband, and arranges a ransom drop. The FBI and Lucas follow Mr. Dunn to the drop. Lucas stops Mr. Dunn just in time to keep him from walking into a room booby trapped with rocks. The lure used to get Mr. Dunn to open the door is a woman hung in a silo in the center of the room. This woman turns out not to be Andi or one of her daughters, but a young woman whom Lucas had interviewed a few days before in connection with the case. It turns out the young woman was the only person who knew the true identity of Mail and her greed in this knowledge caused Mail to take her life.

Lucas decides to use several weaknesses he has discovered in Mail to bring him out in the open. One of these weaknesses is Mail's vanity, the other his sexual interests. Lucas uses a woman from his game development company to put on a press conference and claim the company has developed a way to track Mail. Lucas then has the police watch his office building and be prepared to set up a perimeter in which to catch Mail when he makes his move. Mail, rather than go to the building himself, sends a decoy. However, it is enough. Lucas calls in the perimeter and Mail is caught inside it. Unfortunately, Mail is smart and is able to slip out, but not without killing a police officer first.

Aware for some time that Mail has an informant within the Manette family, Mail slips and tells Lucas that this informant is a woman. Since there are only two women in the Manette family circle, Lucas brings them both into the police department in hopes that one will slip and give them the information they need to find Mail. Helen Manette, Andi's stepmother, finally breaks and gives them the name Mail has been using. Lucas takes a helicopter to the location, reaching it almost at the same instant as Mail. Mail goes into the basement where the women are being held with the intention of killing them. However, Andi and Grace are waiting with their crude weapons. They strike, wounding Mail and forcing him to flee out of the house. Mail shoots a cop during his escape and disappears into a cornfield.

Once outside, Andi Manette looks around and realizes the only place Mail could have put her daughter is a cistern at the back of the property. Lucas has the same thought at the same time. Lucas looks inside, expecting to find a dead body, but instead finds a very sick, very frightened little girl still alive, handing from a coat that is laced over a protrusion on the side of the cistern. Lucas pulls her out and sends the family to the hospital where they are met by a very grateful husband and father.

The area around the cornfield is under guard, so Lucas has no reason to believe Mail will escape until help can arrive to find him. However, Lucas begins searching the area alone, aware of how smart the man is and that he escaped a perimeter once before. Lucas finds a culvert that runs under the road from one field to the next. Lucas instinctively knows that Mail would use this to escape. Lucas looks down one side and then the other and discovers Mail is in fact still in the culvert. Lucas also knows Mail is deeply claustrophobic. Lucas plugs up one end of the culvert and waits. Mail commits suicide.