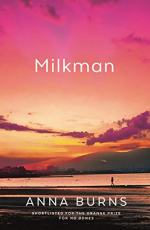 Anna Burns
This Study Guide consists of approximately 41 pages of chapter summaries, quotes, character analysis, themes, and more - everything you need to sharpen your knowledge of Milkman.

This detailed literature summary also contains Quotes and a Free Quiz on Milkman by Anna Burns.

The following version of this book was used to create this study guide: Burns, Anna. Milkman. Minneapolis: Graywolf Press, 2018.

The novel is set in 1970s Ireland during the Troubles, an irregular military conflict between Ireland and the separatists of England-back Northern Ireland. The story takes place in a town somewhere near the northern region. The townspeople are allied with Ireland in the conflict. Military violence sometimes damages the town’s infrastructure and harms or kills townspeople. The novel’s unnamed protagonist (whom we will call Young Woman) is an 18-year-old woman living in the town. She lives with her widowed mother and younger sisters. One day, a local man known as Milkman begins stalking her. He is not an actual Milkman but is simply called Milkman by the townspeople. The judgmental townspeople immediately misread the situation and believe that Young Woman is in a consensual relationship with Milkman. They judge her harshly, for they believe that she is having sex out of wedlock with Milkman.

Young Woman tries to ignore the rumors. The man whom Young Woman is actually dating is a car mechanic of about her age, or maybe a little older. She refers to him as Maybe-Boyfriend, for they have been dating for about a year but have never formally agreed that they are boyfriend and girlfriend. Maybe-Boyfriend works as a mechanic, and one day, he brings home a car part from a rare and valuable car. People become suspicious of his political leanings, as the body of the car had a British flag decal on it. Maybe-Boyfriend manages to mostly dispel these ungrounded suspicions, as the decal is not his.

One evening, Young Woman is walking home from an evening French class when Milkman approaches her. He threatens to kill Maybe-Boyfriend if she does not stop dating him. She is frightened, but she feels somewhat comforted when she then encounters a man whom she calls Real Milkman (as he is the town’s actual milkman). Despite being kind and altruistic, Real Milkman has a reputation of being curmudgeonly, as he once dug up a stash of weapons that local rebel fighters buried in his yard without his permission. Real Milkman suggests that Young Woman should reach out to the local feminist coalition for help and guidance, but Young Woman dismisses the idea, as the feminists are reviled and persecuted by most of the townspeople.

Over the following days and weeks, Milkman continues to stalk and harass Young Woman. She bemoans her lack of recourse, as she knows that the authorities will not help her, and she knows that the townspeople will simply find some way to blame her for her own predicament. Young Woman talks to a woman with whom she has been friend since primary school; she refers to her as Longest Friend. Young Woman is shocked when longest friend places blame for Young Woman’s predicament on Young Woman herself. A few days later, a mentally unstable young woman covertly mixes an overdose of pharmaceuticals into Young Woman’s drink. Young Woman becomes ill but does not die. The mentally unstable young woman is found murdered the following week, and many of the townspeople believe that Young Woman ordered Milkman to perpetrate the murder.

One day, Young Woman’s mother (referred to as Ma) speaks with rare candor about her past. She says that, as a young woman, she had been in love with Real Milkman. Young Woman and her eldest sister work together to persuade her mother to go on a date with Real Milkman. Around the same time, Milkman is found murdered, but no one knows who perpetrated the murder. Also around the same time, Young Woman is assaulted in a club bathroom by a young man with a gun. Young Woman refers to the man as Somebody McSomebody. McSomebody has stalked her periodically over the past year. Fortunately, the other women in the bathroom manage to disarm McSomebody; they then beat him severely. At the end of the novel, Young Woman’s life has achieved a state of relative peace and stability, but there are still many social and political problems negatively impacting life in her town.

More summaries and resources for teaching or studying Milkman.