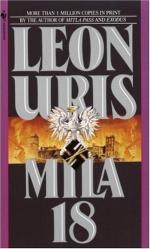 This is the capital city of Poland, subjected to Nazi administration once Germany invades and conquers.

This is the term used to apply to that section of Warsaw where the Jews were forced to live.

This is the Nazi term for concentration camps for the Jews where Jews were exterminated by gassing.

This is a Jewish concentration camp outside of Warsaw.

This is a Jewish school in which children are taught religion along with academics.

This is a Polish national army that fought against the invading Germans in 1939.

This is a Polish dollar.

This is a group of Jews in the ghetto that contributed to the journals depicting the persecution and destruction of the Jews in Warsaw.

This is the Jewish resistance force that fought the Nazis as they invaded the ghetto.