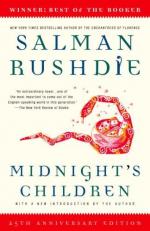 When it was published in 1981, Midnight's Children won the Booker Prize, Great Britain's equivalent of the U.S. Pulitzer Prize; in 1993, the novel was awarded the Booker of Bookers, a honor accorded to the best novel to be published in the competition's first twenty-five years. The book follows the life of Saleem Sinai, who is born at the very moment in 1947 when India gained its independence from British colonial rule. The infant Saleem is switched at birth with a child from a rich family and as a result leads a life of luxury until the mistake is discovered. Like the other children born that night, whom he dubs the children of midnight, he finds himself to have mystical powers; despite the advantages conferred on him, Saleem's life takes him down paths of struggle and ruin before he is able to find peace.

Midnight's Children, roughly based on the early life of its author, Salman Rushdie, is considered a masterful blend of fiction, politics, and magic. Critics credit it with making the worldwide literary audience aware of the changes that India underwent throughout the twentieth century. With his masterful control of the English language and his ability to render even the most minute events in full, vivid details, Rushdie takes readers on an imaginative trip that makes them see his native country in a way that they never did before.