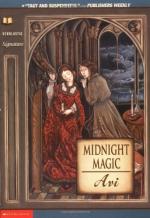 Mangus the Magician once used magic to support his family, although in his heart he is a philosopher. Mangus did not use dark magic; he simply used illusion to fool and entertain people. This led to a trial in the castle that could have ended in death. Mangus has been freed, but his reputation is ruined and he lives in seclusion and fear.

Mangus is called to the castle in order to prove or disprove the princess's claims of being haunted by a ghost. Mangus makes it clear from the beginning that he does not believe in ghosts. Mangus is a philosopher first; therefore, everything he does is based on reason. Mangus assures the king there is a reasonable explanation for the ghost his daughter is seeing.

Fabrizio believes in the ghost. From the first time he sees the ghost, Fabrizio is convinced that the princess...