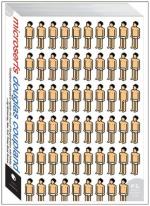 Daniel meets Ethan, the CEO of Oop!. Daniel's first impression is that there is something evil about him, but he later discounts the character flaw as being smarmy. Susan and Ethan hardly ever agree on anything as the new company struggles with financial problems. Daniel discovers that Karla keeps a journal too, but her entries are not detailed and basically report facts.

Until the company can attract VC (Venture Capital, money invested in new and promising companies), everybody works at Daniel's parents' house in what was supposed to be a rumpus room. The work environment is stifling because they do not open the sliding glass door for ventilation because the dog has a habit of disrupting work.

Daniel works on the Windows version of Oop!, while Karla works on the Mac version. Michael is the chief software architect and he has...