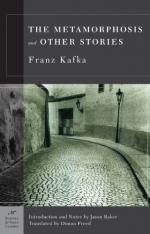 Franz Kafka
This Study Guide consists of approximately 28 pages of chapter summaries, quotes, character analysis, themes, and more - everything you need to sharpen your knowledge of The Metamorphosis.

The Metamorphosis Summary & Study Guide includes comprehensive information and analysis to help you understand the book. This study guide contains the following sections:

This detailed literature summary also contains Quotes and a Free Quiz on The Metamorphosis by Franz Kafka.

The Metamorphosis by Franz Kafka is a dark tale about a man who wakes from disturbing dreams to find he is living a nightmare. He finds that he is lying on his armor-like back. By lifting his head slightly, he can see that his belly is domed and brown, divided into segments by stiff arches. His legs, suddenly so many of them, are so thin and weak in appearance that he can hardly fathom how they would keep him up.

His room, though a bit small by most standards, looks the same as it did when he went to sleep. His material samples still lie on the table. Looking around, he can’t see any difference except for himself. He wants to go back to sleep and wake up normal, but he isn’t used to sleeping on his back and can’t imagine how to get himself over onto his side. He tries unsuccessfully. He keeps closing his eyes, hoping that when he opens them again, he will be himself. It is to no avail. He thinks about his job and how hard it is and considers the fact that were it not for his parents, he probably would have quit some time back. On the bright side however, in five or six years his debt to his boss will be paid, and his life will be his own again. The thought of work has him looking at his alarm clock. When he sees it is already almost seven, he panics. His train leaves in fifteen minutes. Inspired now, he tries to get himself out of bed. In fifteen years, he had never called in a sick day. Strangely enough, he doesn’t feel sick now. Hungry, perhaps more so than usual, but he does not feel sick. His mother calls his name through the locked door, and when he answers her, he doesn’t recognize his own voice. Before too much time passes, his whole family is outside the door, and he is grateful that he locked it the night before. He tries to tell them he is all right, and that he is getting up right away, but even with careful enunciation, his voice sounds wrong.

The next person to show up is from work. Diligent as always, the chief clerk has arrived to see why he wasn’t on the train. He finally manages to roll off the bed, hitting his head as he falls, and his father’s voice continues to come through the door. Gregor’s sister is sent to fetch a locksmith even as Gregor tries to insist he is coming. He manages to work his way to the door and even to unlock it by grabbing the key with his mouth. When his family finally sees him, they back away fearfully and his life of near isolation begins. The chief clerk shows signs of panic and Gregor knows he needs to stop him before he leaves so he rushes forward as quickly as his new body will allow him, but it isn’t quick enough. His father uses a rolled up newspaper and the chief clerk’s stick (left behind along with his hat and coat) and drives Gregor back into his room. Nothing Gregor could say had any effect on his father who didn’t seem prepared to even give him time to turn around first. Backing up, he finally gets to his doorway, but it is too small to get him back in. He pushes himself hard until he manages to squeeze through, scraping one side of his body against the jam. He realizes that he needs to give them time to get used to the new look, and the door is closed with obvious relief. Gregor sleeps for a time, waking after dark. His whole left side hurts. Beside the door is a bowl of milk with chunks of bread in it. A favorite of his, he goes to it eagerly, only realizing when he gets there that it isn’t nearly as nice as he remembers.

In the living room, his family talks in low tones. His sister is the only one who dares come near him, although it is clear that the sight of him still repulses her, so he hides under the bed when she comes. She provides him with a variety of food, and finally figures out that the more rotten the food or fruit, the better he likes it. Grete continues to feed him and clean up after him, but that begins to wear on her after a time as she comes to the conclusion that he will not be changing back into the brother she once knew. Then her attention to him begins to falter. She cleans up after him less, and feeding is sporadic. When Gregor realizes that even she is losing her desire to care for him, a part of him gives up too. He thinks about how he had looked after them, and how he had planned to send her to study music, but none of that mattered now. His life quickly runs its course, and when it does, his family is briefly saddened and then relieved as they begin to live again.

More summaries and resources for teaching or studying The Metamorphosis.

The Metamorphosis from BookRags. (c)2022 BookRags, Inc. All rights reserved.