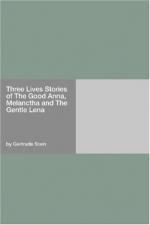 Gertrude Stein
This Study Guide consists of approximately 48 pages of chapter summaries, quotes, character analysis, themes, and more - everything you need to sharpen your knowledge of Melanctha.

In A Moveable Feast (1964), Stein's friend and fellow-novelist Ernest Hemingway describes the Paris world in which both artists lived. His portrayal of Stein influenced how several generations of critics viewed her.

Stein provided a portrait of her life in Paris in her 1933 bestseller, The Autobiography of Alice B. Toklas. Despite the title, the work actually focuses on Stein as allegedly seen through the eyes of her companion.

Novelist James Joyce first established his standing among major writers of the twentieth century with the publication of A Portrait of the Artist as a Young Man (1916). This story of a boy's growth from childhood to young adulthood was, like "Melanctha," revolutionary in its style.

The title character of Sula (1973), a novel by Nobel Prize-winner Toni Morrison, is a black woman who, like Melanctha, "wanders" through life, challenges the morals of those around...

More summaries and resources for teaching or studying Melanctha.

Melanctha from Gale. ©2005-2006 Thomson Gale, a part of the Thomson Corporation. All rights reserved.