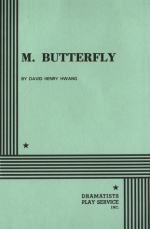 Act Two, Scene 8. Scene 8, as indicated, returns to the announcement of Song's pregnancy. Gallimard tells her he'll divorce his wife and they'll live together in China and later in France. When Gallimard asks Song again to marry him, she tells him no, claiming she is not worthy.

Gallimard addresses the audience, relating he and Song argued all night. In the end, he left knowing he would never be her husband. Song left for the countryside for several months until finally Gallimard received a phone call. Song enters, carrying a baby, and tells Gallimard on the phone the child looks like him. Song gives Gallimard her promise she will raise the child, but he will never leave China. Despite Gallimard's protestations, Song has decided to name the child Peepee. Gallimard concludes her stubbornness in the matter only made him want her more.