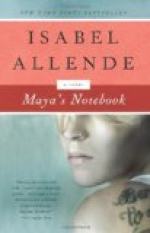 Isabel Allende
This Study Guide consists of approximately 68 pages of chapter summaries, quotes, character analysis, themes, and more - everything you need to sharpen your knowledge of Maya's Notebook.

Maya Vidal’s story is told both in the present and through a series of flashbacks, moving back and forth in time, but her story begins with the flight of Maya’s grandmother, Nidia Vidal, and her son Andres in 1974 from Chile, following the death of Nidia’s husband Felipe and a military coup that led the country into dictatorship. Nidia and her son Andres wind up in Toronto, Canada, where Nidia meets Paul Ditson II, an African American astronomy professor from Berkley, California. Nidia and Paul marry and the family settles in Berkley.

In the late 1980s, Andres, a pilot, impregnates and marries a Danish flight attendant named Marta Otter, who promptly abandons her baby, Maya, to her in-laws. Andres is frequently away for work, so Nidia and Paul (Maya’s Nini and Popo) raise Maya in a bohemian way. Maya loves her grandparents and has a happy childhood until her Popo dies of pancreatic cancer in 2005 when Maya is 15. Nidia falls into a deep depression, leaving Maya to go off the rails on her own, spiraling into drugs and alcohol and cutting school. Eventually she is caught and sent to a rehabilitation academy in Oregon. Maya strains to act normal at rehab, but eventually runs away, winding up in Las Vegas.

A low-level drug dealer named Brandon Leeman picks Maya up and uses her as a delivery girl within the Vegas casinos, exchanging drugs for cash. Brandon’s brother Adam is a counterfeiter, and when Brandon uses some of the fake cash to try to kill off two bodyguards, Brandon winds up dead instead. Fearing for her life, Maya ends up on the street, where she finally succumbs to crack and cocaine. A policeman named Officer Arana tries to get more information about the counterfeit money from Maya, but the bodyguards abduct her. With the help of a fellow addict friend named Freddy and a nurse named Olympia with a big Christian heart, Maya is reunited with her grandmother and father in San Francisco.

Maya’s father pays for her to go to another rehab, where she finally gets clean and starts taking responsibility for her actions. Maya’s grandmother and longtime friend Mike O’Kelly, burn the counterfeit money before leaving Las Vegas, and everyone is worried the thugs and/or FBI might be after Maya, so her grandmother shuttles her onto a plane to Chiloé, an archipelago in Chile, where Maya (now nineteen) will act as a research assistant to Nidia’s old friend Manuel Arias.

Maya spends a year in Chiloé, and life on the island is good for her. She adjusts to the slow pace and isolation, gradually bonding with the curmudgeonly Manuel and the de facto town leader Blanca Schnake. Maya helps Manuel with his book on mythology but wants to help him open up, believing he is carrying a burden of memories from the time of the military coup. After months on the island, Maya falls in love with an American backpacker named Daniel Goodrich, who swings through for a brief visit, but Daniel, though affectionate, never reciprocates the fiery passion Maya feels. Daniel returns to Seattle but briefly visits Nidia and Mike O’Kelly in Berkley. Maya researches Manuel’s time in detention during the military dictatorship, and helps him release his demons, discovering in the process that his is her real grandfather (though he cannot replace her Popo).

Shortly after Daniel’s visit (and the end of his romantic relationship with Maya), Officer Arana from Las Vegas visits Nidia, claiming to want to protect Maya from impending danger, despite the fact that Adam Trevor (the counterfeiter) was arrested. Maya is not surprised when Arana appears in Chiloé, demanding to know where the fake money and counterfeiting templates are. He and Maya scuffle, and fall over a cliff, leaving Arana dead and Maya with a serious concussion. With two prepubescent witnesses and a desire not to make trouble, Arana’s death is chalked up as the accidental death of a tourist, and Maya is free from the fear she has lived in for a year. Nidia and Andres come to Chiloé for Christmas, their first visit back since fleeing. The family is reunited and Maya, surrounded by people she loves, can let go of the suffering caused by the death of her Popo.

More summaries and resources for teaching or studying Maya's Notebook.